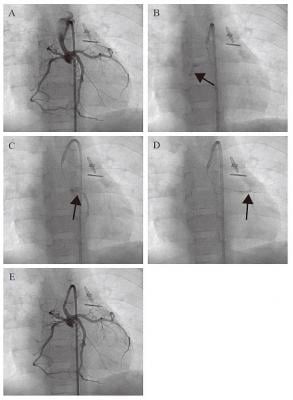 Angiographic images of transcoronary infusion of CDCs into children with HLHS. (A) Primary coronary angiography was performed prior to the CDC infusion. A 5 French guiding catheter Launcher (Medtronic) was placed in the hypoplastic ascending aorta, which was connected to the newly reconstructed aortic arch by the Norwood procedure. Selective CDC transfer was performed into right (B), left ascending (C), and left circumferential (D) coronary arteries by a stop-flow technique (arrows). (E) Hand injection of contrast medium demonstrates that the coronary arteries were unobstructed after CDC infusion.

Children suffering from a lethal congenital heart defect may benefit from injections of a type of stem cells –CDCs. A study conducted by researchers at Okayama University and Okayama University Hospital showed that children suffering from a condition known as hypoplastic left heart syndrome (HLHS) experienced some improvement in cardiac function in the months following injection of CDCs.

The left ventricle, aorta and related valvular components in the hearts of HLHS patients are underdeveloped, with not enough cells being produced. Children born with the condition may die if they do not receive immediate medical attention. They require surgery within a few days of birth and additional treatment is needed long-term to deal with the right-ventricular-dependent circulation.

Previous studies had suggested that loss of a type of stem cell – progenitor cells which can differentiate into a range of other cells – is responsible for lower replication of the heart muscle cells. In their report of the research the Okayama researchers highlight that cardiac progenitor cells in children are “more abundant, self-renewing, and multipotent than those found in adults,” and propose their use as a safe therapeutic strategy for patients with heart failure.

The researchers monitored the heart functions in both a group of seven patients that had received cell injection and a control group of seven patients who had not. As they conclude, “Our prospective controlled study, the first paediatric phase 1 clinical trial of stem cell therapy for heart disease to our knowledge, suggests that intracoronary infusion of autologous cardiac progenitor cells is a feasible and safe approach to treat children with HLHS.”

Tissue-specific stem progenitor cells can be found in the adult mammalian heart. When cloned in suspension they form cardiospheres. The patient-derived CDCs used in the study were tested prior to use to confirm expression of cardiac transcription factors and normal chromosomes to avoid tumour formation after injection. Transcoronary Injection was successfully achieved in all patients with no adverse effects.

The heart functions monitored by the researchers included right ventricular ejection fraction (RVEF), end-systolic volume (volume of blood at the maximum contraction point, ESV), and end-diastolic volume (volume of blood when at the maximum filling point, EDV), stroke volume and cardiac output. In addition the levels a type of peptide - brain natriuretic peptide (BNP) were monitored. These peptides are secreted by the ventricles of the heart in response to excessive stretching of the heart muscle cells.

Due to the rarity of the disease and the difficulty in recruiting a sample population the study was small and non-randomized. With groups of just seven patients the size of the study may limit the ability to draw definite conclusions as to the safety and effectiveness of the using CDC injections to treat HLHS patients. However the improved RVEP 18 months after CDC CDC injection provides a positive proof of concept for the treatment.

Further studies are required to endorse the results. In addition the cell biological mechanisms for enhancing cardiac function are still not understood and a prognostic cell-tracking system may be required as new translational medicine for children.