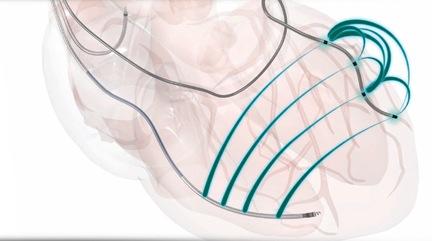 September 9, 2014 — Use of a quadripolar left ventricular (LV) lead instead of a bipolar option during cardiac resynchronization therapy (CRT) can decrease complications at six months, according to preliminary hot line results presented at the 2014 European Society of Cardiology (ESC) Congress in Barcelona.

CRT is a well-proven therapy for heart failure patients, who have benefitted for years with bipolar technology. Quadripolar technology is an important new advance for CRT systems that give physicians more programming options to improve patients’ response to CRT therapy and to minimize potential complications.

The CRT device is implanted under the skin with leads going into the heart. “However, in up to 10 percent of heart failure patients LV lead placement is not successful because of anatomical challenges, phrenic nerve stimulation or poor electrical measurements,” said Boriani. “Quadripolar pacing was developed with the aim of overcoming some of these barriers, but until now it has never been tested in a large, prospective, randomized trial.”

The MORE-CRT study included 1,068 heart failure patients scheduled for CRT from 63 centers in 13 countries. Patients aged approximately 68 years were randomized in a 1:2 ratio to undergo CRT with either a bipolar lead (controls; n=348) or a quadripolar lead (n=720).

The study showed that at six months, compared to controls, patients with quadripolar leads were significantly more likely to be free from a composite endpoint of both intra- and post-operative LV lead-related complications (85.97 percent versus 76.86 percent, P=0.0001) – a relative risk reduction (RRR) of 40.8 percent.

The driver of this benefit was mainly intra-operative complications, which were reduced by more than 50 percent in the quadripolar group (5.98 percent vs 13.73 percent, P<0.0001, RRR 56.4 percent), said Boriani.

There were also fewer post-operative complications in the quadripolar group, but the difference was not statistically significant. “The quadripolar lead provides more options to effectively manage common pacing complications, as compared to systems based on bipolar leads; hence, improving the efficiency of CRT,” concluded Boriani.