Real Time Monitoring of Staff Dose in the Cath Lab 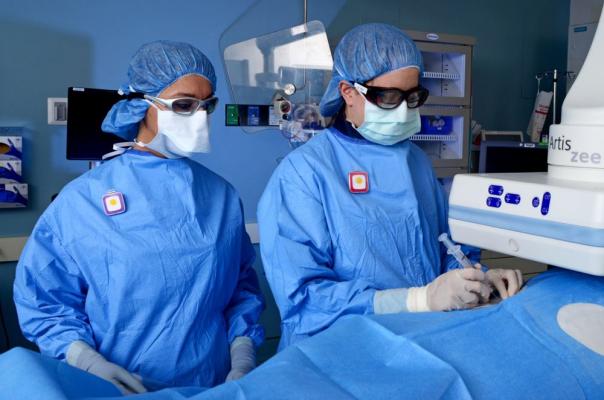 With increased discussion and awareness placed on patient radiation exposure in medical imaging, similar concerns have been raised by clinicians about their own exposure and how it might be reduced. Physicians and staff working in cath labs are constantly exposed to direct X-ray beams and scatter radiation. Traditionally cath lab staff wear radiation badges to record exposure, but these only provide historical data, long after the exposures have taken place. To be meaningful and change habits to reduce exposure, some labs have adopted real-time dose recording systems, which all staff to see the doses they are receiving so they can literally take a step back to reduce their dose.

A key maker of these types of systems is RaySafe, owned by Fluke biomedical, which is now offered as an add-on technology by all the interventional lab angiography X-ray imaging system manufactures on the U.S. market.

With numerous reports coming out about radiation risks to interventional cardiologists, cath lab staffs are concerned.

“Of course we are concerned about it,” explained Scott Pollak, M.D. cardiologist at Central Florida Cardiology Group, Orlando, Fla. “But although radiation exposure is a real issue and exposure within the cath lab and its potential consequences are real risks, everyone in the field is aware of it, but the truth is that it is not something we actively think about, until we are forced to do so.” Pollak said shielding and wearing conventional lead gear helps reduce radiation exposure, but it does not eliminate the danger and most people do not realize when they are getting additional exposure because of where they are standing or if their hands enter the X-ray field

He said people do not worry about potential dangers in their lives, they worry about immediate dangers, so unless there is something to show them they are in danger, it is difficult to change behavior. “Radiation exposure doesn’t seem like an immediate danger to most physicians and clinical staff until it becomes an obvious danger when cancer, cataracts or other health issues make themselves present,” Pollak explained.

While concerned, most interventionalists traditionally have not made radiation exposure a topic of conversation in the cath lab, said Miles Carver, manager of invasive cardiology services at Good Samaritan Hospital, Lebanon, Penn. “The challenge is we need up-to-date reminders often, so the information is not only regularly communicated to us but the most recent findings about the personal risks are in the forefront of our minds. The education about radiation and radiation exposure that physicians and staff receive in the beginning of their careers is sometimes forgotten when they become practitioners of their craft.”

Carver said the actual understanding of radiation safety is not as robust as it should be. “Getting hospitals to understand radiation is one of those issues in our profession that folks really do not think about it. You can’t see it, you can’t smell it, you can’t hear it. Unfortunately, it’s out-of-sight out-of-mind,” he explained.

Carver said Good Samaritan also installed different color floor tile at the six-foot radius mark around the tube as an easy visual cue to all in the room when they are entering an area of potentially higher radiation exposure.

Studies showing these dangers in the cath lab and technological improvements made to newer angiography systems that now enable something to be done about lowering dose have helped bring the issue to the forefront, said Robert Stevenson, M.D., cardiologist and electrophysiologist at Good Samaritan Hospital, Lebanon, Penn.

“There is a general fear of cancers associated with radiation, such as cataracts and hair loss, but no one can say conclusively that cancer is a direct result of radiation exposure,” Stevenson said. “We are absolutely worried about radiation exposure.”

Both Florida Hospital and Good Samaritan Hospital installed the RaySafe i2 system to help reduce radiation exposure their labs. The dose monitoring system allows the cath lab team to get real-time feedback of their radiation exposure at any given moment during a procedure. That information allows physicians and staff to immediately modify their behavior to mitigate radiation exposure.

“We’ve seen changes in behavior and noticed after updating our lab equipment and installing RaySafe i2 we were able to significantly reduce radiation exposure to patients and staff,” Stevenson said.

The new monitoring system allows recording of each staff member’s dose, so Carver e-mails reminders to physicians and staff to alert them of their individual radiation exposure. A weekly report also is posted in a public area for all to see.

“The biggest benefit is awareness,” Pollak said. “Once physicians and staff can see their individual exposure levels, it becomes personal. Radiation loses its cloak of the silent killer with a visual cue that warns them of the ever-present danger.”

Carver agreed and said, “We’ve definitely seen behavioral changes. When physicians and staff are more aware of their personal doses they are more apt to change their behavior.”

As with any capital purchase, the cardiology departments had to justify the expense of adding the monitoring systems.

“It is the responsibility of hospitals to protect their employees by leveraging available solutions for the enhancement of safety within interventional suites,” said Pollak. “This action, coupled with possible regulatory changes in our future mandating radiation protection, will help ensure the safety of physicians and staff.”

Carver said the hospital jumped on board to help assure the safety of its staff after the system was first demonstrated.

“Education is the key to making lasting changes,” said Carver. “You also need a champion radiation safety committee, and the committee needs to be very active. Yes, hospitals must take measures to protect staff but the staff needs to also take responsibility for their actions and utilize the tools provided to the best of their ability.”

There is always room for improvement and everyone from the physicians, staff to the administrators, share in that responsibility, Stevenson said. “The hospital is responsible to provide the latest technology to protect the staff and the day-to-day proper operation of the equipment and its ability to protect the staff is the responsibility primarily of the physician,” he explained.

The physicians agreed the efforts towards improved safety in interventional labs must be ongoing in an effort to build awareness around the issue of radiation exposure.

Read the article "Study Shows Radiation Exposure for Interventionalists Greater on Left Side of Head."