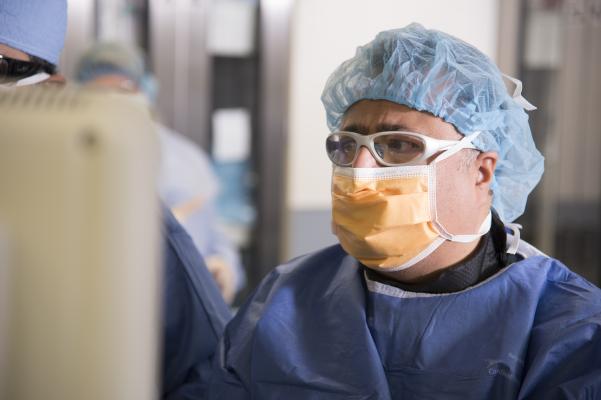 October 6, 2015 – The results of a research study indicate that interventional cardiologists receive “very high” radiation exposure levels to the left side of the head specifically when performing fluoroscopically guided invasive cardiovascular (CV) procedures. Even with modern imaging equipment and shielding, a significant exposure difference was seen between the two sides of the head. The study was published in JACC: Cardiovascular Interventions, a peer-reviewed journal of the American College of Cardiology. Ehtisham Mahmud, M.D., FACC, FSCAI, chief of cardiovascular medicine, director of Sulpizio Cardiovascular Center Medicine and director, interventional cardiology at University of California San Diego, authored the study.

“The implications of this study are significant when considering the subsequent impact ongoing exposure to even low levels of radiation can have on the health of the practitioner over the course of their career,” said Mahmud.

“While it is widely known that exposure to ionizing radiation can cause serious adverse health effects to medical practitioners, the adverse health impact on an individual is determined primarily by the dose to which he or she is exposed. Dr. Mahmud’s study clearly suggests that interventional cardiologists receive a very high level of radiation exposure to the head – specifically, to the left side of the head – creating a greater risk of brain tumors, brain disease and other serious illnesses,” Seymour said.

The study was conducted with eleven operators who wore non-lead, XPF (barium sulphate/bismuth oxide) radiation attenuating protective caps, with dosimeters positioned on the outside and inside of the caps to measure radiation exposure levels. Radiation doses were also measured by dosimeters outside the lab to assess ambient radiation levels.

Seymour noted that, with the large number of fluoroscopically guided procedures performed in the United States each year, “hospitals need to investigate technologies that position operators farther from the source of radiation to reduce or eliminate the potential for long-term health risks on medical staff without compromising patient outcomes.”