Stents Have Equal Outcomes to Bypass Surgery in EXCEL Trial 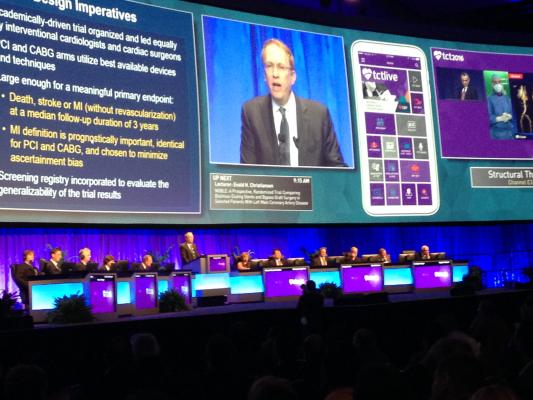 The biggest news from the 2016 Transcatheter Cardiovascular Therapeutics (TCT) meeting this past fall was the results of the EXCEL (Evaluation of Xience versus Coronary Artery Bypass Surgery for Effectiveness of Left Main Revascularization) Trial, which compared the latest generation Xience V drug-eluting stents (DES) to coronary artery bypass surgery (CABG).[1] The result of the 1,905-patient study was that both revascularization strategies have comparable outcomes using the latest techniques and technology in patients with a blockage in the left main coronary artery. Left main lesions have traditionally been the exclusive realm of cardiac surgeons.

The trial highlighted the progress of percutaneous coronary intervention (PCI) in achieving the same clinical results in what can sometimes amount to an outpatient procedure, as compared to the gold standard of open-heart surgery.

“The patients are getting sicker and the outcomes are getting better with PCI,” said David Kandzari, M.D., director of interventional cardiology and chief scientific officer, Piedmont Heart Institute, Atlanta, Ga. He was the principal U.S. investigator in the trial. “However, [the EXCEL Trial] is not a statement that PCI is taking over all of bypass surgery by any means, but the left main artery has always been the domain of surgeons.”

He said guidelines to treat the left main have recommended CABG only. In 2011, the guidelines changed to allow PCI in the left main for some patients at high surgical risk. “Today, what the guidelines have not addressed is what EXCEL has, which is what to recommend for patients who qualify for either PCI or bypass. Hopefully this trial will advance the guidelines even further and allow PCI as an alternative standard of care to bypass surgery…In terms of the really meaningful endpoints of death, stroke and myocardial infarction, EXCEL underscores similarity with PCI compared to surgery. There are also other advantages of PCI, including avoiding periprocedural complications, the need for excessive blood transfusions, atrial fibrillation and sternal wound infection, so it is a positive step forward to be sure.”

“Our study has shown that many patients with left main coronary artery disease who prefer a minimally invasive approach can now rest assured that a stent is as effective as bypass surgery for at least three years, and is initially safer, with fewer complications from the procedure,” said first author Gregg W. Stone, M.D., professor of medicine at Columbia University Medical Center and director of cardiovascular research and education at the Center for Interventional Vascular Therapy at NewYork-Presbyterian/Columbia. Stone presented the EXCEL data at TCT during a standing-room-only session, packed with several thousand cardiologists.

Watch a VIDEO interview with Kandzari at TCT 2016.

Between September 2010 and March 2014, 2,905 patients with left main coronary artery disease were recruited at 126 sites in 17 countries, including 1,905 randomized and 1,000 registry patients. Eligible patients (n=1,905) with LMCAD and low or intermediate coronary artery disease complexity (SYNTAX score ≤32) were randomized to revascularization with fluoropolymer-based cobalt-chromium everolimus-eluting stents (EES; n=948) or CABG (n=957). The primary endpoint was the three-year composite rate of death, stroke or myocardial infarction (MI), powered for noninferiority testing. Major secondary outcomes included this endpoint at 30 days, and the composite rate of death, stroke, MI or ischemia-driven revascularization at three years.

In the three-year follow-up period, the trial added an additional endpoint of target lesion revascularization. “Even with the inclusion of death, stroke, myocardial infarction and repeat revascularization, PCI was still statistically similar to surgical outcomes,” Kandzari said. “By three years, the combined primary endpoint of death, stroke and myocardial infarction was statistically similar and it achieved its non-inferiority endpoint between the two treatment arms.”

“We found that approximately 15 percent of patients in both groups had a heart attack, stroke or died within three years,” said Stone. “In other words, stents were equally effective as bypass surgery.”

The researchers also analyzed what happened to the patients in the first 30 days after treatment, when serious complications are most likely to occur. Within that period, stent patients had a significantly lower incidence (4.9 percent) of death, stroke, heart attack or revascularization than those who had bypass surgery (7.9 percent). In addition, fewer stent patients had major bleeding, infections, kidney failure or severe abnormal heart rhythms compared to those treated with surgery.

The researchers reported that bypass surgery should still be considered standard therapy for those with left main disease and extensive blockages in the remainder of the heart arteries, although the study did not include patients with severe disease.

“Our study establishes stents as an acceptable or preferred alternative for patients with left main coronary artery disease and low or moderate disease complexity in the other three coronary arteries — about two-thirds of all left main patients,” said Stone. “While bypass is still considered a more durable repair, patients and doctors may prefer a percutaneous treatment approach, which is associated with better upfront results, fewer complications and quicker recovery.”

EXCEL was designed to be a rematch DES vs. CABG study using a stent that out performed the Taxus stent used in the earlier 2009 SYNTAX study.[2] That trial used the Boston Scientific Taxus DES, at the time the stent with the best clinical outcomes, and it was widely expected to perform well against CABG. However, Taxus fell short of showing equal performance and showed clinical superiority with CABG.

“Since that time, stents have gotten better, and so has cardiac bypass surgery,” said Stone. “That required us to take a fresh look at the relative safety and effectiveness of the two approaches.”

The Nordic–Baltic–British Left Main Revascularization Study (NOBLE) trial[4] was also presented as a late-breaker at TCT 2016 and was similar to EXCEL, comparing use of a biolimus-eluting stent to CABG in patients with left main disease. However, despite similar mortality, the five-year risk of major adverse events was higher after PCI compared to CABG for the treatment of unprotected left main disease.

There were questions at TCT as to why one trial went so well and the other did not. Experts noted several differences in the trials, including the use of a different type of stent.

“[NOBLE] was a less rigorously designed trial and excluded endpoints like periprocedural myocardial infarction, and it had limitations on the completeness of follow-up,” Kandzari said.

However, he said a key takeaway in NOBLE was the low rate of target lesion revascularization, and the rates of cardiovascular death in both EXCEL and NOBLE were nearly identical.

The original primary endpoint was evaluation of non-inferiority of PCI to CABG assessed by MACCE at two years follow-up in the complete study cohort. Due to lower than expected endpoint rates, the primary endpoint assessment was ultimately changed to a median follow-up of three years.