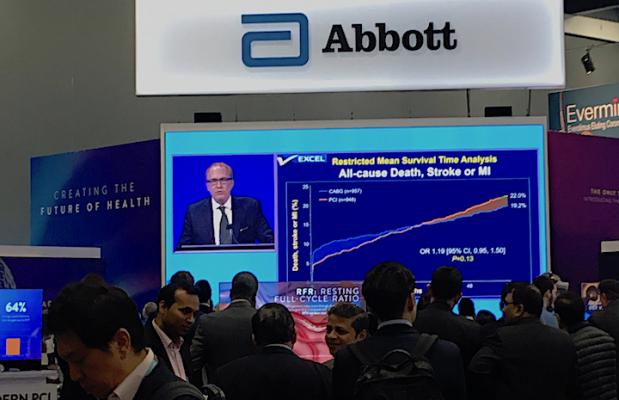 Five-year findings were reported at the 2019 Transcatheter Cardiovascular Therapeutics (TCT) scientific symposium. The study was also published simultaneously in the New England Journal of Medicine (NEJM).[1]

“In patients with left main coronary artery disease and low or intermediate coronary disease complexity, we found no significant difference between PCI and CABG with respect to the composite rate of death, stroke, or myocardial infarction at five years,” said lead investigator Gregg W. Stone, M.D., director of academic affairs for the Mount Sinai Health System, professor of medicine and professor of population health sciences and policy at The Zena and Michael A. Wiener Cardiovascular Institute, Icahn School of Medicine at Mount Sinai, New York, and co-director of medical research and education at the Cardiovascular Research Foundation (CRF). “Ten-year or longer follow-up is required to characterize the very late safety profile of PCI and CABG as both stents and bypass grafts progressively fail over time.”

The five-year data showed statistically the two therapies have about the same outcomes, but there was a data signal slightly favoring CABG.

Patients with left main coronary artery disease (LMCAD) typically have a poor prognosis due to the large amount of myocardium at risk. Revascularization with either PCI or CABG has been shown to prolong survival in patients with left main disease compared with medical therapy alone. Three-year data from the large-scale randomized EXCEL Trial found no significant difference in the composite rate of death, stroke or myocardial infarction (MI) between the two treatments, with a reduction in 30-day major adverse events with PCI. These results were first reported at TCT 2016 and published in NEJM.[2]

Between September 2010 and March 2014, 2,905 patients with LMCAD were recruited at 126 sites in 17 countries. Eligible patients (n=1,905) with LMCAD and site-assessed low or intermediate coronary artery disease complexity (SYNTAX score less than or equal to 32) were randomized to revascularization with fluoropolymer-based cobalt-chromium everolimus-eluting stents (EES; n=948) or CABG (n=957).

For the five-year analysis, the primary outcome was the composite of death, stroke or myocardial infarction. Long-term additional secondary outcomes included their components at five years, as well as therapy failure (definite stent thrombosis or symptomatic graft stenosis or occlusion), all revascularizations, and all cerebrovascular events (stroke or transient ischemic attack).

All-cause death occurred in 13% of patients in the PCI group and 9.9% of patients in the CABG group (difference 3.1%; 95% CI 0.2% to 6.1%). Eighteen of the 30 excess deaths in the PCI arm were adjudicated as non-cardiovascular deaths, five as definite cardiovascular deaths, and seven as undetermined cause. In addition, the five-year rates of stroke and myocardial infarction were not significantly different after PCI and CABG. Ischemia-driven revascularization within five years was performed more frequently after PCI than CABG, while the five-year rates of all cerebrovascular events and definite stent thrombosis or symptomatic graft stenosis or occlusion were less frequent with PCI than CABG.

The EXCEL study was funded by a research grant from Abbott Vascular. Stone has relationships with numerous device and pharmaceutical companies, but had no relevant disclosures for this study.

Stents Have Equal Outcomes to Bypass Surgery in EXCEL Trial