Minimally invasive mitral valve replacement expected to be the next major trend, following in the footsteps of TAVR 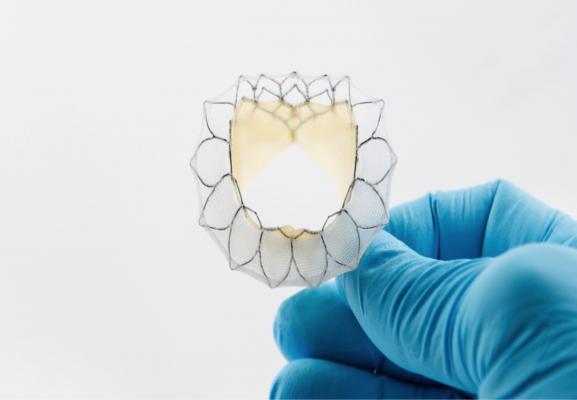 Now that transcatheter aortic valve replacement (TAVR) is rapidly becoming an established treatment option, cardiology has shifted focus toward the next major frontier in interventional structural heart technology — transcatheter mitral valve repair (TMVR). It was very obvious at the 2014 Transcatheter Cardiovascular Therapeutics (TCT) meeting that mitral valve technology will become the next major trend, as sessions on this topic were packed to capacity.
“Everything is now focused on the mitral valve,” said Chad Kliger, M.D., M.S., who attended these sessions. Kliger is assistant professor of cardiology at the Hofstra University School of Medicine within the Division of Structural and Congenital Heart Disease, Lenox Hill Heart and Vascular Institute/North Shore LIJ Health. “All the key people at TCT involved in cardiac surgery and structural heart interventions were either presenters on new mitral valve technologies or they were sitting in the audience.”
Mitral regurgitation is common, affecting more than 4 million Americans — nearly one in 10 people aged 75 and older. [1] Due to the success of TAVR in attracting many new patients with aortic disease to hospitals’ TAVR programs, many are now looking to do the same with that large pool of mitral valve patients. From a practical standpoint, TAVR currently is only indicated for high-risk and non-surgical replacement patients, so its use is limited. However, hospitals with TAVR programs have attracted many new patients despite the fact that most will be turned down for not meeting the U.S. Food and Drug Administration (FDA) indication criteria. But, from a business standpoint, hospitals have been very successful at retaining these patients for their surgical valve replacement programs, boosting surgical procedural volume. TMVR will likely follow a similar path, starting with the sickest patients and a narrow indication, but likely attracting less sick patients who would rather have this minimally invasive procedure over surgery.
The FDA cleared the first transcatheter mitral repair device, Abbott’s MitraClip, in October 2013. The device only mimics one type of open surgical repair for a specific type of mitral regurgitation (MR). It cannot replace a worn-out or heavily stenosed valve, so several vendors are now developing transcatheter mitral valves and new types of delivery systems.

Advancements in TAVR and TMVR Technologies at TCT 2016

​Watch the video VIDEO “Transcatheter Valve Technology Advancements at TCT 2016.” This is an interview Torsten Vahl, M.D., about advancements in transcatheter valve repair technology, including new devices for the aortic, mitral and tricuspid valves. Vahl is director of experimental and translational research and assistant professor of medicine, Columbia University Medical Center, Center for Interventional Vascular Therapy.