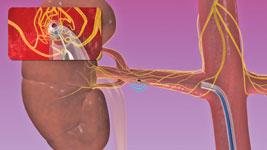 The Symplicity Catheter System delivers radio frequency energy from within the renal artery to block conduction in the surrounding renal nerves. This counteracts chronic activation of the sympathetic nervous system.

For patients with severe hypertension that remains uncontrolled despite medical therapy, radiofrequency (RF) energy can be used in the renal vessels to block nerves involved with the sympathetic nervous system. Researchers believe this has the potential to impact the mechanical and hormonal activities of the kidneys and may eliminate the need for medical therapy.

The Symplicity Catheter System, manufactured by Ardian Inc., delivers RF energy from within the renal artery to block conduction in the surrounding renal nerves. This counteracts chronic activation of the sympathetic nervous system. In addition to blood pressure reduction, this treatment shows promising results for chronic kidney disease, heart failure and metabolic syndrome. The treatment is performed in the cath lab using routine interventional techniques similar to those used in renal stent procedures. The 40-minute treatment is minimally invasive and does not involve a permanent implant.

The Symplicity Catheter System already has CE mark approval in Europe and is in trials in the United States.

Device Effectiveness
An initial study of the device in Australia, the Symplicity I trial, showed promising results. “We saw a drop of 27 mm of mercury and the one-year followup showed the effect on blood pressure was durable,” said Krishna Rocha-Singh, M.D., director of Prairie Vascular Institute, Springfield, Ill. He was involved with Symplicity I and in the planning for the U.S. pivotal trial. He has already used the device in numerous patients. “This treatment may help people who have the worst of the worst disease — who have hypertension that medications just can’t control and who are most likely to suffer from stroke and heart disease.”

Symplicity I showed 89 percent of patients saw their blood pressure drop dramatically. At 12 months, the average decline in systolic blood pressure was 27 points and the decrease in diastolic pressure was 13 points. There was no evidence the procedure harmed vessels or kidney function.

During the European Society of Hypertension meeting this summer, Dr. Markus Schlaich, Neurovascular Hypertension and Kidney Disease Laboratory, Alfred and Baker Hypertension Network, Melbourne, Australia, explained the two-year results of the therapy on the initial cohort of 153 patients. He said there were significant reductions in blood pressure in patients with multidrug-resistant hypertension and the effect has been sustained through at least 24 months. Data also show no significant decline in renal function.

Schlaich added there were no RF treatment-related vascular complications.

U.S. Pivotal Trial
Rocha-Singh said a larger randomized European trial (Symplicity HTN-II) was recently completed and results are expected to be presented at the American Heart Association (AHA) meeting in November. Those findings will help guide the design of a U.S. pivotal trial of 300 patients. Rocha-Singh said the trial is expected to start by late 2010 and will randomize patients between denervation therapy and continued medical therapy.

Using the Device
Treatment is currently limited to patients with specific renal artery anatomy. Rocha-Singh said some patients have vessels that are too small to maneuver the catheter.

The catheter has a flexible RF tip that can be precisely manipulated, similar to RF ablation catheters used in percutaneous electrophysiology procedures. “It is a very elegant device and it is very easy to use,” Rocha-Singh said.

It uses a 6 French guiding catheter in the femoral artery. Rocha-Singh said it does not require a guidewire to enter the renal arteries.
The renal nerves lie in adventitia, encircling the renal arteries. The device uses four to six, two-minute RF treatments along each renal artery.

Patient Selection
“The patients chosen for treatment in trials now had no other options,” Rocha-Singh said. In the patients he has treated with the device, some were on as many as seven or eight blood pressure medications and still had issues controlling hypertension. He said the numerous medications also contributed to a lower quality of life with constant blurred vision and fatigue.

Patients with persistent hypertension are taking note of the new therapy. “Even patients are seeing the news coming out in the media and from the medical conferences. I had a patient from Alaska contact me the other day asking how they could get involved in the trial,” Rocha-Singh said.

Current and planned trials do not include diabetics or heart failure patients with cardio-renal syndromes. However, Rocha-Singh said these subgroups will likely be added later.

“There is no doubt other cohorts of patients will benefit from this therapy,” he explained. “There are broader implications of this procedure, such as the possibility of using it to address other conditions, such as chronic kidney disease and heart failure. Another hope is that we eventually may be able to use this therapy to help patients with mild to moderate hypertension, without the use of drug therapy.”

Treating Other Conditions
Since denervation reduces the hyperactive impulses generated by the sympathetic nervous system, researchers say it might be valuable in treating other conditions related to hypertension. These conditions, which have increased sympathetic nerve activity, include left ventricular hypertrophy, chronic renal disease, heart failure, cardio-renal syndrome and sudden cardiac death.