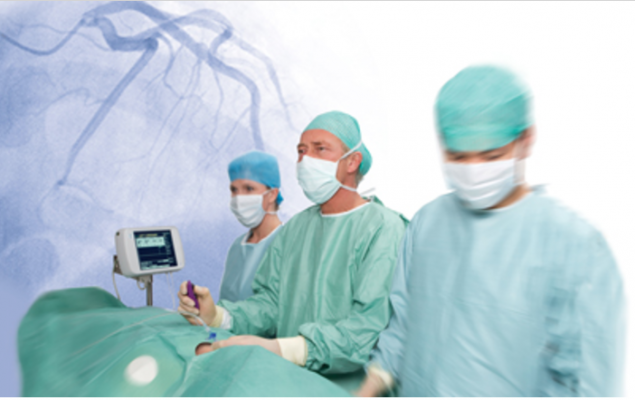 Contrast-induced nephropathy (CIN) is a significant problem resulting from the use of iodine contrast agents in computed tomography (CT) scans and cath lab angiography. It can have a negative impact on mortality. This article outlines some of the key information on the agents themselves, possible methods of action and how to prevent and treat CIN.

Contrast agents consist of organic carrier molecules containing large concentrations of iodine, which has proved to be the best element for X-ray absorption in clinical applications. They can be monomers or dimers (containing one or two tri-iodinated benzene rings with iodine located at positions 2, 4 and 6 of the ring); ionic or nonionic (depending on the presence of a carboxyl anion group on the side chain at positions 1, 3 and 5 of the benzene ring); and high-osmolar (more than 1,200 mOsmol/kg H2O), low-osmolar (600–1,000 mOsmol/kg H2O) or iso-osmolar (280 mOsmol/kg H2O) compared to the normal blood osmolarity (280–295 mOsmol/kg H2O).

High-osmolar ionic agents such as diatrizoate (Renografin) are no longer commercially available in the United States due to side effects of cardiac depression and arrhythmia secondary to calcium binding (they contained EDTA and sodium citrate) and higher incidence of CIN. They were replaced by low-osmolar ionic dimers such as ioxaglate (Hexabrix), and low osmolar nonionic monomers such as iohexol (Omnipaque), iopamidol (Isovue) and ioversol (Optiray). The only iso-osmolar agent available (also a nonionic dimer) is iodixanol (Visipaque).

The exact mechanism is not well understood because patients with presumed CIN are typically not biopsied (given the rapid resolution of the disease) and because patients at risk have substantial underlying disease, which makes detecting the changes responsible for the acute decline in renal function even more difficult. Most data come from animal models. Some studies show evidence of acute tubular necrosis. The two major theories are renal vasoconstriction (resulting in medullary hypoxemia, possibly mediated by alterations in nitric oxide, endothelin and/or adenosine) and tubular injury (due to direct cytotoxic effects or in association with the generation of oxygen-free radicals).

Definition and Prognosis of CIN

Unfortunately, the definition of CIN has not been consistent in the literature, which makes the comparison of data from various studies difficult. Definitions include elevation of serum creatinine from 0.5 or 1 mg, and/or a 25% increase in serum creatinine from baseline occurring two to five days after exposure in the absence of other causes of acute renal failure. The magnitude of the problem is significant: 22% of patients with CIN died during the index hospitalization compared with only 1.4% of patients without CIN.

Among hospital survivors with CIN, one- and five-year estimated mortality rates were 12.1% and 44.6%, respectively, much greater than the 3.7% and 14.5% mortality rates in patients without CIN.

The reported incidence varies widely (from zero to more than 50%) because of differences in the presence or absence of risk factors (primarily underlying chronic kidney disease), the definition of CIN, the amount and type of agent administered, prospective or retrospective determination of incidence, the exact radiologic procedure and the exclusion of other causes of acute renal failure (for example, atheroemboli during arteriography). In general, the incidence of CIN is negligible with normal renal function, even if the patient is diabetic.[14]  It increases to 4–11% with mild to moderate renal insufficiency alone (plasma creatinine 1.5–4 mg/dL); 9–38% if patient is also diabetic; above 40% in patients with more advanced renal dysfunction, marked volume depletion, advanced heart failure or multiple contrast studies within a 72-hour period; and above 50% if baseline plasma creatinine is above 4 mg/dL, particularly in patients with diabetic nephropathy.

As previously mentioned, the use of hyper-osmolar contrast agents is associated with higher risk of CIN than nonionic low-osmolar or iso-osmolar agents. Some studies have demonstrated a dose-dependent risk of renal dysfunction. Low dose has been variably defined as less than 70 mL, less than 125 mL or less than 5 mL/kg (to a maximum of 300 mL) divided by plasma creatinine. However, diabetic patients with a plasma creatinine above 5 mg/dL may be at risk from as little as 20 to 30 mL of contrast.[11]

Some operators calculate a risk score for CIN. This has both patient and procedural variables, so it is not an exclusive preprocedural risk assessment.

Diagnosis and Differential Diagnosis of CIN

Urine should not be tested for protein for at least 24 hours after a contrast study because many of the commonly used radiocontrast agents induce false positive results when either a dipstick or sulfosalicylic acid is used to detect proteinuria, leading to overestimation of protein excretion. Thus, diagnosis is based upon the characteristic rise in plasma creatinine beginning during the first 12 to 24 hours of exposure.

The renal failure is usually non-oliguric, mild, transient and recovers within three to five days. Persistent renal failure requiring dialysis, which occurs in about 0.8% of all cases, has been primarily described in patients with preexisting advanced underlying disease, particularly in diabetics.[18] Atypical clinical presentations (for example, delayed onset or late recovery) should bring attention to other causes of renal failure, including (but not limited to) hypotension, sepsis and medication exposure. Renal atheroemboli occur among patients with diffuse atherosclerosis and are associated with other embolic lesions (as on the toes), livedo reticularis or transient eosinophilia and hypocomplementemia.

Management is similar to any cause of acute tubular necrosis, maintaining fluid and electrolyte balance. Since there is no specific treatment once CIN develops, the best treatment of CIN is prevention.

1) Contrast dose: Use of lower doses and avoidance of repetitive studies that are closely spaced (within 48 to 72 hours).

2) Type of contrast agent: The use of hyper-osmolar ionic agents in the past was associated with higher incidence of CIN compared to low-osmolar or iso-osmolar nonionic agents. Initial data showed a benefit of the iso-osmolar agent iodixanol (Visipaque) compared to low-osmolar iohexol (Omnipaque) among patients who have diabetes and chronic kidney disease.[2]  However, later data showed no benefit for iodixanol (Visipaque) compared to other nonionic low-osmolar agents, including iopamidol (Isovue) and ioversol (Optiray).  Thus, the initial data may represent an adverse effect of iohexol rather than a beneficial effect of nonionic iso-osmolar agents.

The ACC/AHA guidelines on percutaneous coronary intervention (PCI) were revised in 2009 to suggest use of either the iso-osmolar agent iodixanol (Visipaque) or a low-osmolar agent other than iohexol (Omnipaque) or ioxaglate (Hexabrix), indicating that in the current era, it appears that the type of contrast does not have a significant effect. An alternative contrast agent is carbon dioxide, which produces satisfactory imaging with no or little nephrotoxicity. However, its use is limited by the risk of neurotoxicity when injected close to the cerebral circulation or if there is a right-to-left intra-cardiac shunt. Thus, its use should be limited to imaging below the diaphragm.

3) Avoidance of factors that increase renal vasoconstriction: such as volume depletion or non-steroidal anti-inflammatory drugs.

5) N-acetylcysteine: It has antioxidant and vasodilatory properties. Although not well understood, a possible mechanism of benefit in CIN involves minimizing both vasoconstriction and oxygen free-radical generation after radiocontrast agent administration. Prior studies of N-acetylcysteine have produced conflicting results. Some, often small, earlier studies suggested benefit, but many other contemporary studies and meta-analyses found no clear benefit. There also are potential issues of publication bias and poor methodology in several analyses.

The recently completed large randomized study ACT (Acetylcysteine for CIN Trial) demonstrated no benefit in primary or secondary endpoints. Since the agent is well tolerated, relatively inexpensive and has not been proven to be harmful, some operators still use it in patients at high risk for CIN. However, some may elect not to give this unproven therapy. In the 2011 percutaneous intervention guidelines, it is listed as Class III recommendations (no benefit; level of evidence: A).

Since there is no specific treatment once CIN develops, the best treatment of CIN is prevention. Thoughtful risk stratification of patients and periprocedural planning help minimize the risk of CIN through adequate hydration, minimizing contrast dose and avoidance of other renal insults. In the current era, it appears that the type of contrast does not have a significant effect on prevention of CIN.

Editor’s note: Mark Michael, M.D., and Jeffrey A. Breall, M.D., Ph.D. are from the Krannert Institute of Cardiology and Indiana University School of Medicine. Breall is the director of cath labs and interventional cardiology. He serves on the DAIC Editorial Advisory Board.

1. Klein L, Sheldon M et al. “The Use of Radiographic Contrast Media During PCI: A Focused Review. A Position Statement of the Society of Cardiovascular Angiography and Interventions.” Cath and CV Interv 2009; 74:728–746

27. Shaw DR, Kessel DO. “The current status of the use of carbon dioxide in diagnostic and interventional angiographic procedures.” CV Intervt Radiol 2006; 29:323.