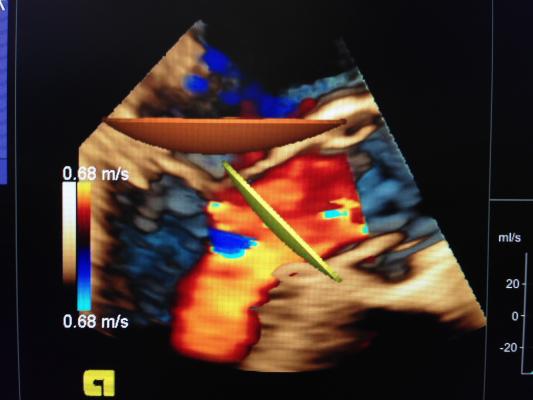 September 5, 2019 — Abbott announced the launch of the company's TRILUMINATE Pivotal trial evaluating the safety and effectiveness of its TriClip transcatheter tricuspid valve repair system for the treatment of severe tricuspid regurgitation (TR). This is the first pivotal Investigational Device Exemption (IDE) trial in the U.S. to evaluate a catheter-based, non-surgical treatment for patients with severe TR – a condition in which the valve does not close properly, allowing blood to flow backward into the heart, which forces the heart to work harder. In severe cases, this condition can potentially lead to heart failure if left untreated.[1][2][3]

In the U.S. alone, approximately one in 30 people over the age of 65 have moderate to severe TR.[4] Despite the prevalence of tricuspid valve disease, the tricuspid valve is often referred to as the "forgotten heart valve" as treatment options are limited. There are currently no approved non-surgical, minimally invasive treatments for people with severe TR.

The first enrollments in the TRILUMINATE IDE study occurred at Abbott Northwestern Hospital in Minneapolis, Minn., led by Paul Sorajja, M.D., and his cardiac team. Sorajja also serves as the trial co-primary investigator.

"Patients with symptomatic tricuspid regurgitation are often at an increased risk for conventional surgery. As a result, many are not referred for intervention," said David Adams, M.D., chairman of the Department of Cardiovascular Surgery at the Icahn School of Medicine at Mount Sinai and the cardiac surgeon-in-chief of the Mount Sinai Health System and co-primary investigator in the trial. "The opportunity to assess how we can better treat these patients with a minimally invasive approach is critical and  we're excited about the potential for this therapy in improving the quality of life for these patients."

The TRILUMINATE Pivotal study is a prospective, multi-center, randomized, controlled global study of approximately 700 patients expected to enroll in the United States, Canada and Europe. Patients will be randomized to receive either the TriClip device or medical therapy and followed for a total of five years. The study will also have a single arm for the treatment of subjects with more complex tricuspid valve disease.

Alongside the TRILUMINATE study, Abbott's TriClip device was accepted for national reimbursement consideration through a process known as "Parallel Review" by the U.S. Food and Drug Administration (FDA) and the Centers for Medicare and Medicaid Services (CMS). The Parallel Review program is a collaborative effort intended to reduce the time between FDA approval and Medicare coverage decisions through CMS's National Coverage Determination (NCD) process.

The launch of the TRILUMINATE Pivotal IDE study follows a smaller, single-arm TRILUMINATE trial that was conducted in Europe and the U.S. to evaluate the safety and performance of the TriClip repair system. Results from that study, presented during a late-breaking session at EuroPCR 2019, found that after 30 days, 86.6 percent of patients who received the TriClip device saw a reduction in TR severity of at least one grade. In addition to a strong safety profile for the procedures in patients considered to be at high risk for surgery, a significant proportion of patients also saw an improvement in their heart failure symptoms as assessed using the New York Heart Association (NYHA) functional classification and Kansas City Cardiomyopathy Questionnaire (KCCQ) score.