Device has, to date, navigated complex anatomies with no peri-procedural complications 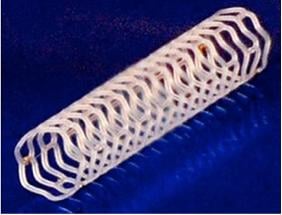 The Fortitude sirolimus-eluting BRS is being evaluated in two multi-center, international trials, both of which are designed to support a planned application for CE Mark. In this clinical program, a total 49 patients have been treated in centers in Colombia, South America (MEND-II trial) and Italy (RENASCENT trial). Early preliminary results from these studies demonstrate the scaffold's capabilities to navigate through complex anatomies with a balance of deliverability and biomechanical performance. No peri-procedural complications have been reported to date.

"Our clinical trial experience with the Fortitude BRS is very encouraging," commented Granada, primary investigator of the MEND-II study. "Building upon its high biocompatibility profile, the Fortitude BRS exhibits the biomechanical behavior expected by the interventional community in addition to the long-term vascular benefits of device absorption, both of which have significant impact on clinical outcomes. Specifically, the Fortitude BRS has the capability to over-expand approximately four-fold what is possible with commercially available BRS, providing physicians with the operational flexibility we have with metallic scaffolds."

Antonio Colombo, M.D., director of the cardiac cath lab and interventional cardiology unit, EMO-GVM Centro Cuore Columbus in Milan, Italy, and primary investigator of the RENASCENT trial, added, "While results from the RENASCENT study are still early, we are encouraged by the acute performance of the device, which shows no indication of device failure or peri-procedural complications, further supporting the mechanical strength and durability of the device platform. I look forward to enrolling additional patients and completing nine?month imaging follow-up visits, which will unveil the real potential of this second-generation BRS platform."

Additional details of Amaranth's technology clinical program will be provided by Granada in a presentation titled: "Bench Testing and Pre-Clinical Evaluation of the Amaranth PLLA Scaffold."

The MEND-II and RENASCENT trials are built upon the successful results from MEND-I, the first-in-human clinical study of Amaranth's bare Fortitude BRS, which was conducted in Colombia, South America. This study met its primary endpoint at six months. Patients who had been enrolled in MEND-I continue to show excellent clinical performance two years after implant. Further, angiographic and optical coherence tomography (OCT) follow-up demonstrate late lumen gain in treated vessels at two years, relative to six months.