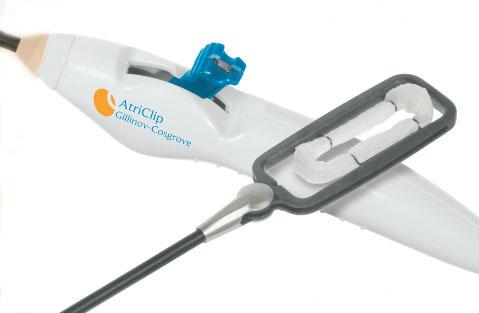 August 28, 2019 — AtriCure Inc. announced it has received U.S. Food and Drug Administration (FDA) 510(k) clearance of additional labeling claims for AtriClip left atrial appendage (LAA) management devices. These include changing the indication from occlusion of the LAA to exclusion, and also adding electrical isolation as a labeling claim.

Exclusion shuts off and/or eliminates the appendage from the left atrium, whereas occlusion plugs the opening to prevent flow into the LAA. The electrical isolation claim was granted after testing demonstrated that when excluding the LAA using an AtriClip device, the appendage can no longer conduct electrical activity.

AtriClip devices have been used in more than 190,000 procedures worldwide, according to the company. Over the past several years, new iterations of the AtriClip device have been developed and brought to market. These include enhancements to make the devices less invasive, amenable to a wider range of patient anatomies, and adaptable to varying operator preferences and techniques. These new labeling claims reflect that AtriClip devices exclude the appendage, resulting in eliminating it as a source of electrical activity through the process of ischemic necrosis. The safety and effectiveness of AtriClip devices in rhythm control management of an atrial arrhythmia, either alone or in combination with ablative treatment, has not been established.

“Historically, the surgical amputation of the left atrial appendage in a cut-and-sew fashion was considered to be the gold standard for LAA management," said S. Patrick Whalen, M.D., from Wake Forest Baptist Health. "The AtriClip device mimics the gold standard by eliminating the LAA by epicardial, mechanical closure. The subsequent ischemic necrosis process ceases all electrical activity in the LAA perioperatively and the appendage is ultimately resorbed.”

"Our research has defined a clear benefit of the electrical isolation of the LAA," said Dhanunjaya Lakkireddy, M.D., from Kansas City Heart Rhythm Institute (KCHRI). "The AtriClip device excludes the left atrial appendage in a manner that could result in its electrical isolation.”