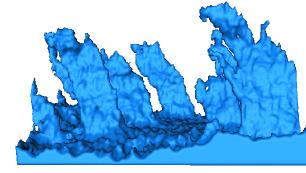 Two patients may seem equally sick based upon clinical measures, but differences in their heart physiology could predict who has the potential to recover from heart failure. A study carried out by scientists at the University of Utah finds that patients whose hearts have flattened t-tubules have a decreased chance of showing signs of recovery after implanting a mechanical heart pump. Ordinarily, t-tubules in the heart are long, thin, and rounded. Image courtesy of Frank Sachse.

January 17, 2017 — Investigators at the University of Utah have identified distinct differences in the hearts of advanced heart failure patients who have defied the odds and showed signs of recovery from the disease. Published online in the journal Circulation, the new findings could help clinicians identify the best candidates for cardiac recovery therapies.

“Based on everything a doctor would traditionally measure, these patients look equally sick,” said co-senior author and cardiologist Stavros Drakos, M.D., Ph.D., an associate professor of internal medicine. “But what we’re seeing is that there are differences between them at the biological level, and we can use that information to predict who has a chance to recover.”

Less than 10 years ago, advanced heart failure was dubbed “end-stage” for a reason. Aside from receiving a heart transplant, there were no treatment options. Since then, researchers have found that some patients respond differently after implantation of a mechanical heart pump, called a left ventricular assist device (LVAD). The invasive procedure comes with its own risks, but for 15 to 20 percent of these patients something happens that was considered unthinkable a decade prior: the pump unburdens the damaged heart and promotes recovery.

The discovery led Drakos and Frank Sachse, Ph.D., associate professor of bioengineering and co-senior author of this study, to reason that “responders” could provide clues to recovering sick hearts.

Considering the burden of heart failure, it’s important to find new answers, said Drakos. One in five American adults over age 40 will develop heart failure within their lifetime, according to the American Heart Association. And half die within five years of diagnosis, an outlook that’s worse than for most cancers.

When Sachse looked at samples from heart failure patients for the first time, he thought something had gone technically wrong. An anatomical structure called the transverse system (t-system) typically extends thin, rounded fingers into heart fibers. In most “nonresponders”, advanced three-dimensional imaging showed their t-system instead looked like squashed, flattened sheets.

“That was not what we expected at all,” said Sachse, also an investigator at the Nora Eccles Harrison Cardiovascular Research and Training Institute. He had researched heart failure in animal models for over a decade, but had never seen anything like what he saw in these patients. Investigations with human heart samples is uncommon.

In contrast to the nonresponders, the t-system looked relatively intact in samples from responders. In fact, the scientists could retrospectively gauge a patient’s potential for recovery based on measurements that calculated how close to normal their t-system was.

“We’re seeing that a patient’s anatomy can help predict if that person has a high or low chance of recovery at the time of LVAD implantation,” said first author Thomas Seidel, M.D., Ph.D., who carried out the project as a postdoctoral fellow with Sachse. “Our vision is that we can one day use this information to identify those patients that finally will not need a heart transplant, but may instead be weaned from the LVAD to go back to a normal life.”

At the time of LVAD implantation, all patients’ hearts did a poor job of pumping out blood to the rest of the body. A measurement of the heart’s squeezing performance, called the ejection fraction (EF), was at 21 to 23 percent on average (normal range is 50 to 70 percent). After three months of pumping assistance with an LVAD, the hearts of patients with severely disrupted t-systems performed about the same, with an EF of 25 percent.

Patients whose heart physiology was not as severely impacted improved significantly over time, with their EF rising to 38 percent on average. While still below normal, the change signals that their hearts were getting stronger, said Drakos.

Additional experiments with explanted heart tissue delved further into explaining why the patients respond differently. Tissue with severely abnormal physiology also had asynchronous calcium signaling, a mechanism that ordinarily coordinates contraction of cells in the heart.

Drakos explained that a lot goes awry with the heart during advanced stages of the disease. But studies like this one provides a glimpse into mechanisms behind the disorder, information that could one day lead to new strategies for treatment. “Most therapies are based on knowing what goes wrong in disease,” he said. “There’s also a lot to be gained from understanding what goes right.”