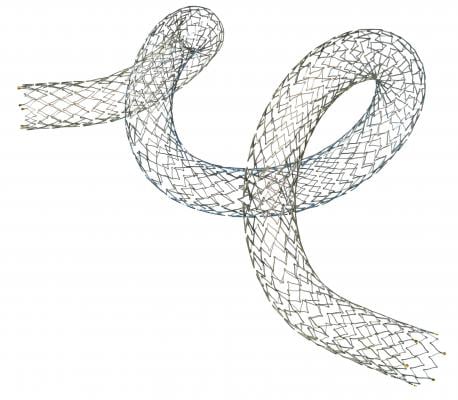 August 8, 2014 — Biotronik announced the completion of patient enrollment in the superficial femoral artery (SFA) arm of its BIOFLEX-I clinical trial, an U.S. Food and Drug Administration (FDA)-approved investigative device exemption (IDE) trial evaluating the use of self-expanding nitinol stents in treating peripheral artery disease (PAD). A total of 296 patients were successfully implanted with the Astron Pulsar and Pulsar-18 stents at 34 centers in the United States, Canada and Europe.

The investigational Pulsar-18 is currently the only self-expanding stent with 4-French introducer sheath compatibility for stent diameters of up to 7 mm and lengths of up to 200 mm. It represents a major advance in the minimally invasive treatment of lower limb disease. Pulsar-18 is designed to have high bending and axial flexibility. Its sufficient chronic outward force and crush resistance are intended to support the vessel while minimizing the risk of inflammatory response that can be triggered by excessive chronic outward force.

Pulsar-18 and 4 French approaches to lower limb interventions were validated in several independent studies, including the 4EVER study, which showed excellent technical success, safety and efficacy for up to two years. In this study, the primary patency of Pulsar-18 was 73.4 percent at 12 months and 69.7 percent at 24 months.1 More recently, the Pulsar-18 stent showed 79.5 percent primary patency 12-month results in the PEACE I all-comers registry. [2]

“Achieving this enrollment goal in the BIOFLEX-I study brings us one step closer to having these novel products available to US physicians for the treatment of lower limb disease,” remarked principal investigator Mark W. Burket, University of Toledo Medical Center, Toledo, Ohio. “The Pulsar-18 and Astron stents will give physicians greater opportunity to treat peripheral vascular disease, thereby improving patient quality of life.”