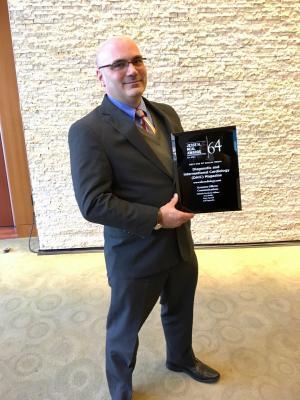 In March, I made a day trip to New York City to receive the 2017 Jesse H. Neal Award for Best Use of Social Media. The award was in recognition of DAIC’s extensive use of social media in 2017, which helped the magazine set a record with 1.4 million website pageviews in 2017.

The Jesse H. Neal Award, bestowed annually by the Software & Information Industry Association (SIIA), is recognized as the “Pulitzer Prize of the business press.” Winners are selected for exhibiting journalistic enterprise, service to the industry and editorial craftsmanship.

I also serve as editor for DAIC’s sister radiology publication, Imaging Technology News (ITN). For ITN, I was also named a Neal finalist in the Best Range of Work by a Single Author category for my coverage of new radiology technologies, blogs, show coverage, social media use and video production.

The biggest driver for DAIC’s social media by far is Facebook. If anyone had told me five years ago Facebook would become an important part of my daily workflow for a cardiology magazine, I would have thought they were crazy. But in 2017, more than 125,000 pageviews on our website came from Facebook readers. A lot of those clicks were for our trade show coverage, where DAIC has reached more than 80,000 unique readers in a single week during ACC.17.

DAIC also was honored in April with a pair of Azbee Awards for editorial excellence, Upper Midwest Region, from the American Society of Business Publication Editors (ASBPE).  The contest included more than 1,000 entries across 78 categories.

DAIC was recognized with a Silver in the Blog — Analysis/Commentary category for “Insights Into Cardiovascular Technology Advances,” and a Bronze in the Social Media Presence category. DAIC is also a national finalist for the blog. The blog series submitted for the award included the following 2017 blogs: