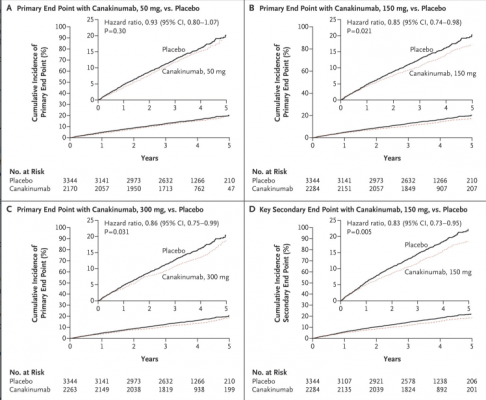 September 12, 2017 — The IL-1β inhibitor canakinumab lowers the risk of cardiovascular disease and lung cancer risk by reducing inflammation, according to late-breaking results from the CANTOS trial presented at the 2017 European Society of Cardiology (ESC) Congress and published in the New England Journal of Medicine (NEJM).

“These findings represent the end game of more than two decades of research, stemming from a critical observation that half of heart attacks occur in people who do not have high cholesterol,” said principal investigator Paul M. Ridker, M.D., director of the Center for Cardiovascular Disease Prevention at Brigham and Women’s Hospital, Boston. “For the first time, we’ve been able to definitively show that lowering inflammation independent of cholesterol reduces cardiovascular risk. This has far-reaching implications. By leveraging an entirely new way to treat patients – targeting inflammation – we may be able to significantly improve outcomes for certain very high risk populations.”

The CANTOS trial [1] aimed to test whether reducing inflammation in patients who had a prior heart attack can lower the risk of another cardiovascular event. The drug tested was canakinumab, a human monoclonal antibody that neutralizes interleukin-1β signalling, thereby suppressing inflammation. It is used to treat rare inherited conditions associated with overproduction of IL-1β.

The study included 10 061 patients who had previously had a heart attack and had persistent, elevated levels of high sensitivity C-reactive protein (hsCRP), a marker of inflammation. All patients received aggressive standard care, which included high doses of cholesterol-lowering statins. In addition, participants were randomised to receive 50, 150 or 300 mg of canakinumab, or a placebo, administered subcutaneously once every three months. Patients were followed for up to four years.

Exploratory analyses revealed that canakinumab dramatically cut rates of total cancer death, especially death due to lung cancer, as well as the incidence of lung cancer. The effects were dose dependent.3

Ridker said: “We found that in high risk patients, a drug that lowers inflammation but has no effect on cholesterol reduced the risk of major adverse cardiovascular events. In my lifetime, I’ve seen three broad eras of preventative cardiology. First we recognized the importance of diet, exercise and smoking cessation. Then we saw the tremendous value of lipid-lowering drugs such as statins. Now we’re cracking the door open on the third era. This is very exciting.”

“As an inflammatory biologist and cardiologist, my primary interest is heart disease but CANTOS was a good setting to explore a previously observed link between cancer and inflammation,” Ridker said. “The data on cancer rates point to the possibility of slowing the progression of certain cancers, but these are exploratory findings that need replication.”

Ridker has served as a consultant to Novartis and is listed as a co-inventor on patents held by Brigham and Women’s Hospital that relate to the use of inflammatory biomarkers in cardiovascular disease and diabetes that have been licensed to AstraZeneca and Siemens.

The study was sponsored by Novartis.