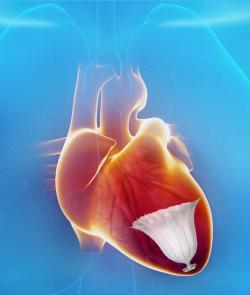 January 9, 2015 — CardioKinetix Inc. announced results of a pooled analysis study of the catheter-based Parachute ventricular partitioning device. Twelve-month clinical data from PARACHUTE III, a study of 100 post-market European patients with ischemic heart failure treated consecutively between 2011 and 2013, were presented at the 2014 TCT Conference in Washington, D.C., and the 2014 HFSA Conference in Las Vegas. Ulrich Schäfer, M.D., cardiology director of the Structural Heart Division at the Heart Center at the University Medical Center Hamburg-Eppendorf, announced the results at TCT, and William Abraham, M.D., professor of internal medicine and director of the Division of Cardiovascular Medicine at Ohio State University Medical Center, presented at the HFSA Conference

“The results of this European post-market study continue to substantiate the safety profile and effectiveness of the Parachute as a viable, minimally invasive device technology for patients with heart failure,” said Abraham. “The very compelling data from these 100 European patients demonstrates the clear promise of this breakthrough technology and is exciting news for the more than 50 active hospitals in the U.S. randomized trial, PARACHUTE IV, which is currently enrolling patients.”

Parachute had a very high procedural success rate of 97 percent (97/100). The twelve-month highlights from the data include:

“The results of this trial add excitement about the Parachute treatment, which offers an option to heart failure patients with a very poor prognosis the promise for improved quality of life and reduced rates of mortality and heart failure hospitalization,” said Schäfer.

Treatment options for patients whose ventricle has enlarged and who suffer from heart failure are limited, with a significant number currently receiving an implantable cardioverter-defibrillator (ICD) and approximately one-third receiving a cardiac resynchronization therapy device (CRT-D) device. The Parachute device offers the first minimally invasive catheter-based treatment to partition the damaged muscle, excluding the non-functional heart segment from the healthy, functional segment to decrease the overall volume of the left ventricle and restore its geometry and function.