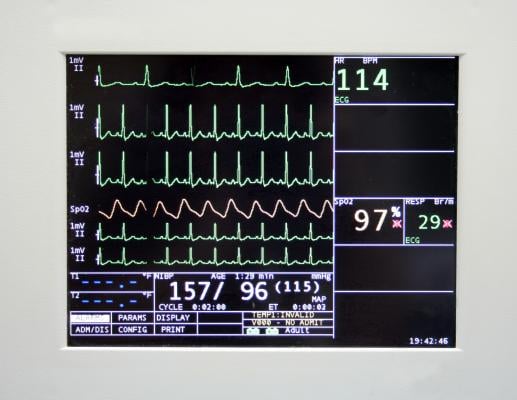 June 26, 2017 — A Cedars-Sinai Heart Institute investigator and his team have developed a new risk assessment tool that brings physicians closer to predicting who is most likely to suffer a sudden cardiac arrest.

Sudden cardiac arrest, an electrical disturbance in the heart rhythm that causes the heart to stop beating, can be prevented sometimes – if there is a way to determine who is likely to have one so that appropriate medical treatment is administered in time.

“For most people who have a sudden cardiac arrest, it is too late for them by the time 911 is called,” said the study’s senior author, Sumeet Chugh, M.D., director of the Heart Rhythm Center at the Cedars-Sinai Heart Institute in Los Angeles. “Because so few survive, it’s crucial for us to predict which patients are most vulnerable. This new risk score gives us a better idea of who is most likely to have cardiac arrest. Best of all, it is broadly accessible. It uses widely available and very inexpensive technology.”

The new risk score from Chugh and his team is based on readings from a 12-lead electrocardiogram (EKG) test — the oldest and least expensive cardiac test available. Their findings, published in European Heart Journal, show how the researchers calculated patients’ risk scores using multiple data points from a patient’s EKG. Data points include the patient’s heart rate, left ventricular hypertrophy (thickening of the walls of the heart), and four specific measures of how the heart muscle undergoes electrical stimulation and relaxation. Patients determined to be at high risk for sudden cardiac arrest can be pre-emptively treated with medication and by implanting a defibrillator that can shock a stopped heart into beating.

Patients’ scores range from zero to 6. Patients scored at 4 or above have as much as 20 times the increased risk for sudden cardiac arrest as patients with lower scores.

More than 350,000 out-of-hospital cardiac arrests occur annually in the United States, and the condition is fatal in more than 90 percent of patients. Although the terms “sudden cardiac arrest” and “heart attack” often are used interchangeably, the conditions are different. A sudden cardiac arrest is an electrical disturbance in the heart rhythm that causes the heart to stop beating, and usually causes death immediately. A heart attack is caused when one of the major arteries leading to the heart becomes clogged, usually with plaque, disrupting the flow of blood to the heart muscle.

Because of the major public health implications of sudden cardiac death, finding a better means of identifying individuals at high risk has been a priority for the medical community. The currently available method to assess risk of sudden cardiac arrest is based on measurement of the left ventricular ejection fraction (LVEF), which measures how effectively the heart is pumping blood. Patients with LVEF value below 35 percent are deemed to be at high risk. However, this method has not been found to be effective and also does not help those with LVEF over 35 percent, who happen to be the majority of patients who suffer sudden cardiac arrest. The study found that the EKG-based score worked for patients at all levels of LVEF measurement and was especially effective among patients with LVEF over 35 percent.

“This new risk score has the potential to provide clinicians with a user-friendly, inexpensive, data-driven tool for determining which of their patients could benefit from interventions to prevent sudden cardiac arrest,” Chugh said.

Doctors may use the score to determine which patients will benefit most from interventions such as the implantable cardioverter-defibrillator, a device that can be surgically placed in the body to restore the heartbeat lost during sudden cardiac arrest within seconds by delivering a timely electrical shock.

The findings came out of a larger research enterprise called the Oregon Sudden Unexpected Death Study, an ongoing, comprehensive assessment of all sudden cardiac arrests in the Portland, Ore., metropolitan area, home to 1 million people. The study, founded and led by Chugh, has been underway for more than 15 years. Data collected from it provides Chugh and his team with unique, community-based information to mine for answers to what causes sudden cardiac arrest.

Researchers analyzed a unique resource of 522 patients who suffered sudden cardiac arrest, who also had archived 12-lead EKG readings available before and unrelated to the lethal event. They were compared with 736 geographical control patients to discover and assess the effectiveness of the new risk score. The risk score was then successfully validated in the Atherosclerosis Risk in Communities Study, a separate U.S. cohort of patients that also tracks those who experience sudden cardiac arrest. The novel risk score is now ready for further prospective clinical evaluation, Chugh said.