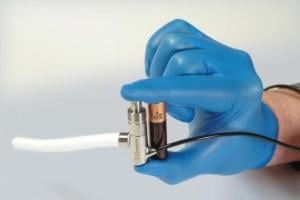 April 23, 2012 - CircuLite Inc. announced that updated clinical data related to the Synergy miniature ventricular support system was presented in two oral presentations and one poster session at the International Society for Heart and Lung Transplantation’s 32nd Annual Meeting and Scientific Sessions (ISHLT) in Prague, Czech Republic. The company also announced the successful implantation of the Synergy system in its 51st patient in the ongoing CE mark trial.

Updated results presented from the ongoing CE mark clinical trial for the Synergy system included significant improvements in hemodynamics, exercise capacity and quality of life in INTERMACS 4, 5 and 6 heart failure patients. A second presentation described the induction of positive physical changes to the left ventricle with the Synergy system, including size reductions toward normalcy (reverse remodeling). These data came from a study conducted in a preclinical model of heart failure and from a comparative analysis of explanted hearts conducted at the time of heart transplantation. A poster presentation discussed preclinical data supporting the feasibility of bi-ventricular support with two Synergy pumps.

“Approximately 90 percent of the patients in the ongoing CE mark trial were classified as INTERMACS 4, 5 and 6. The risk of currently marketed cardiac support device implantation could be considered too high for many in this group, yet these patients are very sick and their quality of life is severely impacted,” said Bart Meyns, M.D., Ph.D., professor and chief of cardiac surgery at Gasthuisberg University Hospital and clinical advisor to CircuLite. “The Synergy System is implanted in an off-bypass procedure and results from early clinical experience for this first-of-its-kind technology are encouraging and support the potential for Synergy to treat a larger proportion of heart failure patients who are not responding to standard medical care and are not candidates or eligible for heart transplantation.”

“CircuLite is establishing its leadership position in developing less invasive circulatory assist systems with the world’s smallest implantable blood pump technology for long-term use,” said Paul Southworth, president and CEO of CircuLite. “Surpassing the 50th patient milestone in our ongoing CE mark trial demonstrates that CircuLite is making strong clinical progress with Synergy as we plan to advance the system with CE mark in the coming months, initiate a U.S. pilot trial with Synergy and continue to advance our strong pipeline of next-generation circulatory support systems.”

CircuLite’s Synergy system includes a micro-blood pump the size of a AA battery that can be implanted superficially in a "pacemaker-like" pocket. Synergy is the first and smallest surgically implanted device designed for partial circulatory support (up to 4.25 L/min) in patients with heart failure. CircuLite is currently conducting a clinical trial with Synergy in patients with Class IIIB/early Class IV heart failure at multiple centers in Europe, aimed at achieving CE mark.

In an oral session, Professor Meyns presented an abstract titled “A New Treatment Option for INTERMACS Profile 4, 5 and 6 Patients with the Circulite Synergy System” by B. Meyns, F. Rega, M. Strueber, A. Barbone, E. Vitali and D. Burkhoff, which detailed an ongoing European study of patients receiving Synergy system support (data presented on 50 patients). In patients who underwent follow-up right heart catheterization at a median of 13 weeks (n=28), cardiac index increased from 2.2 ± 0.5 L/min/M2 to 2.7 ± 0.5 L/min/M2 (p<0.001) and large reductions in capillary wedge pressure from 27.1 ± 9.6 mmHg to 17.5 ± 6.2 mmHg (p<0.001) were observed. In addition, with the current data available from the ongoing trial, significant increases in exercise tolerance, functional status and quality of life were observed. Improvements made in the Synergy system used in the last 13 patients have significantly decreased the rate of overall severe adverse events (events per patient-years). No strokes or other episodes of neurologic dysfunction were reported in these last 13 patients. These data support the notion that the Synergy system may provide clinical benefits and, in clinical experience to-date, has a low adverse event profile that helps justify treating this less sick patient population.

Another abstract titled “Reverse Remodeling With the Use of the CircuLite Synergy Circulatory Assist System” by J. Geens, P. Claus, S. Jacobs, M. Martin, I. Van Tichelen, F. Rega, D. Burkhoff and B. Meyns was presented in an oral session by Meyns. The team examined preclinical models of chronic heart failure as well as 37 hearts at the time of explants in patients undergoing heart transplantation (19 without cardiac support, 13 supported by HeartMate II and 5 by Synergy). Across both preclinical and clinical analyses, six weeks of partial ventricular unloading with the Synergy system induced remodeling of the left ventricle. Hearts supported by the Synergy system had significantly lower volumes and geometric distortion than those of chronically failing unsupported hearts, as well as normalization of passive end-diastolic pressure-volume relationships. These data were also reflected in the clinical trial data, in which patients’ cardiac indices increased over the duration of support, suggesting that reverse remodeling did occur. Additionally, one patient experienced myocardial recovery after 140 days support; the Synergy micro-pump was explanted and the patient is doing well.

A poster titled “Two CircuLite Pumps as Bi-Ventricular Assist Device (BVAD) in an Ovine Animal Model” by J.D. Schmitto, D. Burkhoff, M. Avsar, O. Fey, P. Ziehme, G. Buechler, A. Haverich and M. Strueber was also presented. Bi-ventricular support (simultaneous support of the left and right ventricles) with two Synergy system micro-pumps was proven to be feasible and able to provide full hemodynamic support in a preclinical model. This approach holds promise for providing bi-ventricular partial support in humans and, in particular, for full support in small adults and children.