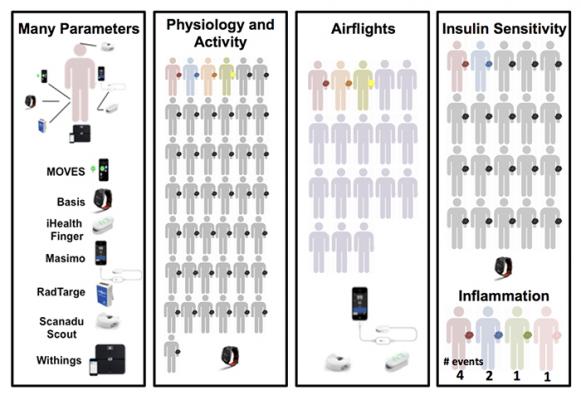 March 14, 2017 — Researchers supported by the National Institutes of Health have revealed the ability of wearable biosensors, similar to the Apple Watch or Fitbit, to detect physiological changes that may indicate illness, even before symptoms appear. The findings, published Jan. 12, 2017, in PLoS Biology, may open the door to new ways to manage and monitor health, especially for those with limited access to doctors or clinics.

Changes in heart rate, blood pressure and body temperature can reveal health issues, such as cardiovascular disease or infection. While these are evaluated at yearly checkups, without more frequent monitoring, diseases can go unnoticed and progress between doctor visits. Additionally, these parameters vary greatly over the course of the day and between individuals, so a one-time reading may not be representative or give enough information to make a personalized assessment.

Wearable biosensors, like fitness trackers and activity monitors, can now check these parameters regularly. Although many people have started using them for personal use, larger, more comprehensive studies are needed to investigate their potential in healthcare.

“You can’t really make any scientific conclusions from personal data,” said Grace Peng, Ph.D., director of the National Institute of Biomedical Imaging and Bioengineering (NIBIB) program in Computational Modeling, Simulation, and Analysis. “Here, the authors have taken an enormous of amount of data and made sense out of the entirety in a very systematic way using data science tools and analytical methods.”

The team of researchers, from Stanford University and Veterans Affairs Palo Alto, first followed one man’s results for the two years that he wore seven different devices. Each device measured a variety of parameters, including his level of activity, radiation exposure and levels of oxygen-bound hemoglobin in his blood, and recorded more than 250,000 measurements each day. Based on its accuracy, ability to measure three key variables — heart rate, skin temperature and movement — and easily accessible data, they selected a Basis brand device to monitor an additional 43 subjects for an average of five months each.

In the first individual, they assessed how physiological measurements fluctuate over the course of the day, revealing the importance of frequent measurements, as a once-daily reading might not provide the whole picture. Comparing the other participants, they noted a wide range of heart rates, indicating the need for personalized analysis. The results also showed that wearable biosensors can provide both frequent measurements and personalized analysis.

Next, they evaluated instances when the readings appeared abnormal. The participant who was monitored for two years had four periods in which his heart rate and skin temperature were unusually high. During three of those periods, he reported clinical symptoms like congestion; following one of the outlying periods, he was diagnosed with Lyme disease. “The wearable was actually able to predict Lyme disease even before the patient had any symptoms,” said Peng.

Three other participants became sick at some point during the monitoring period. In each instance, the participant’s heart rate spiked, compared to his or her individual average. Using their data, the team created an algorithm, called Change-of-Heart, to identify possible illness based on when heart rate deviated from its normal range.

“It was incredibly exciting that we could actually detect illness using just a consumer wearable device,” said Jessilyn Dunn, Ph.D., a postdoctoral research fellow at Stanford University and one of the lead authors on the paper. To prevent false alarms, Dunn said they will continue to refine the algorithm to identify only true outliers and take into account one’s level of individual variability. She does not envision Change-of-Heart as a diagnostic tool just yet, but rather as a red flag to tell people they may need to examine their stress levels, get more rest, or see a doctor.

Although not a means of diagnosis yet, the study did raise the possibility of someday using wearable devices to identify risk for type 2 diabetes. Because many of the participants were at risk of becoming diabetic, the team was able to demonstrate the physiological signals, like high daytime heart rate, that correlated with insulin resistance. The study also investigated how parameters change during airplane flights and the ability of the monitors to detect radiation exposure.

The 24/7 monitors might also provide a more representative assessment of general health. “We know that the day that you go into the doctor once a year, it might not be your typical day, so we can get a picture of what that really is,” said Dunn.

Additionally, the trackers can monitor patients in rural or low-income areas that may not have easy access to a doctor. “For those individuals who can’t easily come into a clinic, they’re still under a sort of health surveillance mechanism,” Dunn said. “There’s a really exciting potential for this type of technology to really revolutionize the healthcare model.”

VIDEO: Photon Counting Detectors Will be the Next Major Advance in Computed Tomography