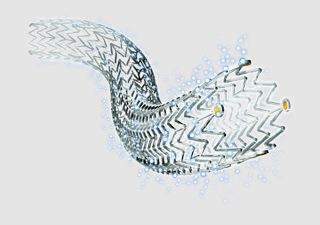 September 9, 2014 — Cook Medical has enrolled the first patient in the clinical study in China of its Zilver PTX Drug Eluting Peripheral Stent. The case was performed by one of the study’s principal investigators, Prof. Peng Liu, M.D., at the China-Japan Friendship Hospital in Beijing.

“It’s great to have enrolled the first case of Zilver PTX China clinical trial by our center,” said Liu. “The product represents the latest drug technology in the peripheral vascular system. We are looking forward to bringing this new technology to Chinese patients to overcome the troublesome restenosis problem."

The study will evaluate the performance of the Zilver PTX stent to treat peripheral artery disease (PAD) in the superficial femoral artery in Chinese patients. Chinese patient outcome data will be compared to patient results shown in Cook’s global randomized clinical study of the device. The study is a pre-market requirement of the China Food and Drug Administration (CFDA). Data collected will be submitted to CFDA in support of commercial registration of Zilver PTX in China.

“Based on the evidence to date [1], we’re convinced drug elution is the future of treating PAD. This milestone moves Cook one step closer to bringing this remarkable technology to Chinese physicians and the patients they treat,” said Mark Breedlove, vice president and global leader of Cook’s peripheral intervention clinical division. “We look forward to concluding this study quickly and making a timely submission to CFDA.”

The study, the first of its kind in China, is being conducted at up to 20 clinical sites and will enroll 175 patients with one-year follow-up. Study leaders include global principal investigator Michael Dake, M.D., of Stanford University, Stanford, Calif., and co-national principal investigators Changwei Liu, M.D., of Peking Union Medical College Hospital in Beijing, and Weiguo Fu, M.D. of Zhongshan Hospital Fudan University in Shanghai. A total of six patients at two sites now are enrolled in the study.

Cook’s Zilver PTX Drug Eluting Peripheral Stent is indicated for treatment of symptomatic vascular disease of the above-the-knee femoropopliteal arteries having a reference vessel diameter from 4 mm to 9 mm. To date, the device has been studied clinically in more than 2,200 patients worldwide. Zilver PTX is approved for commercial sale in the United States, Japan, Europe, Canada, Australia, Brazil, India and other markets.