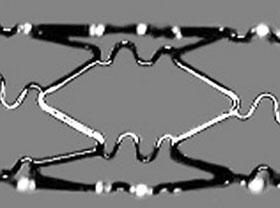 September 1, 2010 - The results of follow-up tests undertaken ten years after the first patient was treated with a Cypher sirolimus-eluting coronary stent were presented at the European Society of Cardiology in Stockholm. Cordis announced that the Cypher stent has proven outstanding long-term efficacy and safety and the results were published earlier this year in the Journal of the American College of Cardiology: Cardiovascular Interventions.

The 85-year-old patient was the first-ever patient to be treated with a Cypher stent in the nonrandomized, in-human trial and made history by undergoing the longest term followup, 10 years later.

The patient, who was treated with the Cypher stent at the age of 75 after her coronary angiography showed a significant, single, de novo lesion in the proximal left anterior descending (LAD) artery, underwent further invasive followup revealing a sustained anti-proliferative effect of the Cypher stent by both angiography and intravascular ultrasound (IVUS) examination in 2009.

The patient also underwent an optical coherence tomography (OCT) assessment which revealed a complete coverage of more than 90 percent of the analyzed struts. This 10-year followup of the first-ever patient to be treated with Cypher took place continuing a tradition of comprehensive testing for the most studied drug-eluting stent in the world and reinforcing the Cypher sirolimus-eluting coronary stent's reputation for efficacy and safety.

Professor Eduardo Sousa, M.D., who led the team carrying out the first-in-human trial in 1999 and the 10-year follow-up tests in 2009 in Sao Paolo, Brazil, said, "We are very pleased with these results. This historic followup has revealed a sustained anti-proliferative effect of the Cypher stent by both angiography (in-stent late lumen loss of 0.10mm at 9 months as compared to 0.11 at 48 months) and IVUS examination (in stent of obstruction of 1 percent at four months and one, two, four and nine years). In addition, the 10-year OCT assessment revealed a complete coverage of more than 90 percent of the analyzed struts. This is an impressive outcome and a testament to the efficacy of the Cypher stent."

Marie Claude Morice, M.D., who led the initial RAVEL trial presented to the European Society of Cardiology in 2001, explained, "The Cypher sirolimus-eluting coronary stent was the first of its kind and was a major advance over bare-metal stents. A key trial showing the efficacy of the Cypher stent found that up to five years after receiving the stent, the risk of restenosis of the artery is reduced by 60 to 70 percent compared to an uncoated stent. It is also the longest-studied drug-eluting stent, with more than 200 medical trials having been carried out and 155,000 patients observed. These trials, from the initial RAVEL trial in 2001 to this latest ten-year followup, have proven the Cypher stent's safety and effectiveness."