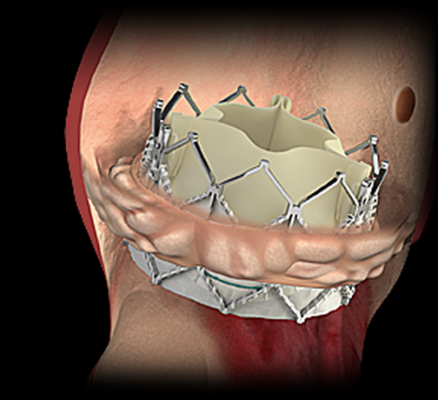 The new data, involving more than 3,000 patients enrolled in The PARTNER II Trial, showed dramatic improvements in cardiovascular health status as well as overall physical and mental well-being after transcatheter aortic valve replacement (TAVR) with the Edwards Sapien XT and Sapien 3 valves. The health benefits with TAVR were early and sustained.

“Because AS patients are generally elderly and often have multiple comorbid conditions, many of them care more about maintaining or improving their quality of life rather than simply achieving a longer life,” said David J. Cohen, M.D., professor of medicine at the University of Missouri-Kansas City and director of cardiovascular research at Saint Luke’s Mid America Heart Institute, who presented the late-breaking data from the PARTNER II randomized trial at TCT. “Taken together with previous data demonstrating very low mortality and disabling stroke rates with transfemoral TAVR among patients at intermediate surgical risk, these findings demonstrate that, for such patients, ­­­TAVR provides both early and late benefits that are important from the patient’s perspective.”

Building off the foundational work of the PARTNER II randomized trial, a separate analysis of intermediate-risk patients treated with the Sapien 3 valve in the PARTNER II Trial demonstrated even greater health status improvements than the Sapien XT valve at one month with persistent benefits compared with surgery at one year. These data were presented by Suzanne J. Baron, M.D., M.Sc., assistant professor of medicine at the University of Missouri-Kansas City and a clinical scholar at Saint Luke’s Mid America Heart Institute.

The Sapien XT and Sapien 3 are the only transcatheter aortic valves approved for the treatment of intermediate-risk patients in the United States.

Cohen is a consultant to Edwards Lifesciences.