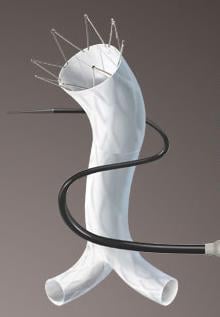 "We are excited to be the first hospital in the U.S. to bring the benefits of the new AFX system to a patient in our local community," Milner said. "The device builds on the compelling clinical evidence supporting Endologix's unique anatomical fixation technology with an enhanced, lower profile delivery system and new graft material. The 17 French introducer sheath and integrated delivery system make it easy to use in a wide range of patient anatomies. The AFX system performed very well during the procedure; the delivery and deployment of the stent graft was quick and precise, and post-procedure imaging confirmed that the aneurysm was effectively sealed."

AAA is a weakening of the wall of the aorta, the largest artery in the body, resulting in a balloon-like enlargement. Once AAA develops, it continues to enlarge and, if left untreated, becomes increasingly susceptible to rupture. The overall patient mortality rate for ruptured AAA is approximately 75 percent, making it a leading cause of death in the United States.