Endovascular Repair of Ruptured Aortic Aneurysms Could Save More Lives 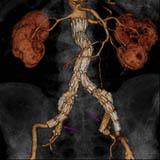 AAA kills about 13,000 Americans every year. If detected before it ruptures, an AAA that is two inches or larger can be repaired either surgically or with minimally invasive endovascular aneurysm repair (EVAR).

“Although studies have shown EVAR can be used in an emergency situation, this is the first to compare EVAR and open surgery on a level playing field, because all of the patients were deemed EVAR-suitable,” said Jantje Ten Bosch, M.D., a surgery resident at Atrium Medical Center, Heerlen, Netherlands, who is presented the study at ISET. “This data strongly suggest that EVAR is a valuable treatment option in EVAR-suitable patients with a ruptured AAA.”

EVAR is far less invasive than open surgical repair of AAA, but a downside is that one in 10 such repairs leak (an endoleak) potentially needing further repair. To monitor for endoleaks, patients undergo CT scans at three, six and 12 months after the EVAR procedure, and yearly after that. CT scans are costly and involve high doses of radiation and use contrast dye, which can damage the kidneys. Preliminary research suggests a simple blood test may be able to detect when such a leak is occurring, potentially preventing up to 90 percent of follow-up CT scans.

“The study is the first to show that concentrations of MMP-9 might accurately discriminate between patients with and without an endoleak,” said Ten Bosch, M.D., co-author of the endovascular vs. surgical repair study. The results must be confirmed by a prospective clinical validation trial, he said.

A new type of EVAR device that treats the entire aneurysm – a bag instead of a tube – could solve some of the problems of endografts, including leaking and shifting of the device. It could also be used to minimally invasively treat more people whose blood vessel anatomy isn’t conducive to EVAR with an endograft.

The treatment involves advancing two 5- to 6-inch stents enclosed in the deflated endobags to the site of the aneurysm, one through the right femoral artery, and one through the left. Each stent is inflated with a balloon and provides the scaffold defining the channels through which the blood flows. The endobags are filled with polymer and conform to the available space inside the aneurysm. The polymer cures in about five minutes to a consistency similar that of a pencil eraser, creating a durable repair designed not to shift or leak. Essentially, the portion of the aorta with the aneurysm is bypassed with two channels that direct blood to the right and left femoral arteries.

To date, 32 people in four countries (Colombia, Venezuela, Latvia and New Zealand) have had the endobag device implanted. Independent audited results are not yet available.

“The endobag seals the aneurysm, and to date, we haven’t seen any significant movement or shifting of the device,” said Andrew Holden, M.B.Ch.B., professor and director of interventional radiology at Auckland City Hospital, New Zealand. “If results are positive, the system has the potential to treat a significantly larger group of patients with abdominal aortic aneurysm whose anatomy isn’t conducive to placement of an endograft.”

The International Symposium on Endovascular Therapy (ISET) is attended by more than 1,200 physicians, scientists, allied professionals and industry professionals from around the world. The meeting pioneered the use of live cases to promote the multidisciplinary treatment of cardiac and vascular disease by endovascular means. ISET is presented by the Baptist Cardiac & Vascular Institute, Miami.