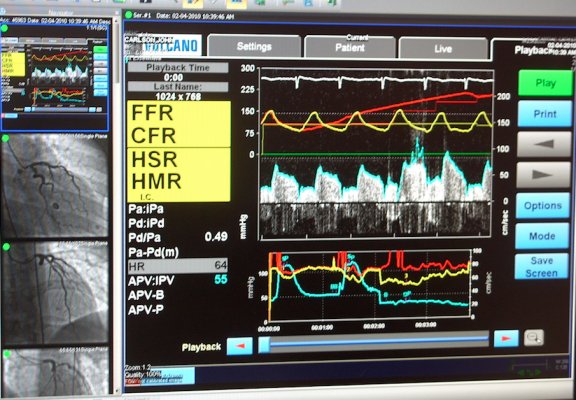 Each study demonstrated a clinical benefit in favor of FFR-guided PCI, including urgent revascularization in the primary endpoint. However, each trial by itself was not powered for the endpoint of cardiac death or myocardial infarction. For this reason, a pooled, patient-level analysis including 2,400 patients was performed to address adequately whether FFR-guided modern PCI reduces cardiac death or myocardial infarction versus medical therapy.

This is the first pooled analysis on a patient level which includes all existing trials comparing FFR-guided PCI with contemporary stents versus medical therapy. In addition, this analysis extended follow-up for both the FAME 2 and DANAMI-3-PRIMULTI trials.

“Our results show for the first time that modern PCI, when guided by FFR, reduces so-called 'hard endpoints' – the composite outcome of cardiac death or myocardial infarction – when compared to an initial strategy using medical therapy," explained Frederik M. Zimmermann, M.D., ​Department of Cardiology, Catharina Hospital Eindhoven, The Netherlands. "Importantly, we found a relative risk reduction of approximately 30 percent when using FFR-guided treatment, which corresponded to an estimated absolute risk reduction of about 4.5 percent at five years. Our analyses also favored FFR-guided PCI when examining the composite of all-cause death or myocardial infarction. Differences between groups were driven by a reduction in myocardial infarction. No differences were observed for deaths from cardiac causes or deaths from any cause."

What role do innovation, devices or technology play in these results?

“In patients with stable coronary lesions, contemporary PCI – i.e., guided by FFR – reduces the risk of future myocardial infarction or cardiac death independently of its impact on symptoms,” Zimmermann said.