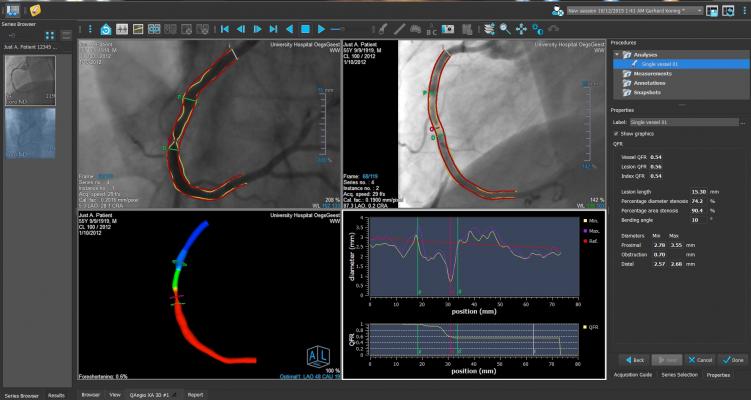 FAVOR II Europe-Japan was a prospective observational, investigator-initiated study performed at 11 hospitals in Europe and Japan from March 2017 to October 2017 with a primary endpoint of sensitivity and specificity of QFR compared to two-dimensional QCA (2D-QCA) with FFR as reference standard. The study found that QFR had higher sensitivity (88 percent vs. 46 percent, P<0.001) and specificity (88 percent vs. 77 percent, P<0.001) compared to 2D-QCA. Key secondary endpoints of feasibility of QFR (defined as the fraction of vessels with successful FFR measurements where in-procedure QFR is computed) was 97 percent (N=373) and time to QFR was 4.8 minutes (IQR: 3.5-6.0) compared to 7 minutes for FFR (IQR: 5.0-10.0), P<0.001.

The FAVOR II Europe Japan study was funded by Aarhus University Hospital, Skejby and participating institutions. The QFR solution was provided for free during the study period. The FAVOR II CHINA trial was funded by Pulse medical imaging technology (Shanghai) Co., Ltd, the National Key Research and Development Program of China, and the Natural Science Foundation of China.