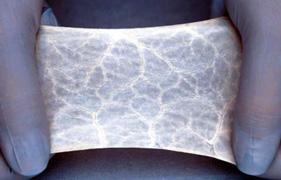 September 24, 2010 - The U.S. Food and Drug Administration (FDA) has granted conditional approval to start a trial testing a new treatment to reduce the incidence of new onset postoperative atrial fibrillation.

The trial will demonstrate the safety and efficacy of the CorMatrix extracellular matrix (ECM) for pericardial closure. Patients enrolled will undergo circumferential reconstruction of the normal pericardial anatomy following isolated, first-time coronary bypass grafting (CABG) procedures. The results will be compared to subjects who do not undergo pericardial closure.

The clinical trial, anticipated to enroll more than 400 patients at up to 15 cardiac surgery sites in the United States, is being initiated by CorMatrix following analysis of data from a retrospective study that demonstrated a statistically significant reduction in the rate of new onset postoperative atrial fibrillation in CABG patients following pericardial closure with the ECM. Data from this retrospective study have been accepted and will soon be published in a peer-reviewed journal.

Following cardiac surgery, new onset postoperative atrial fibrillation is the most common arrhythmic complication, with reported incidence between 32 percent and 64 percent, and poses a serious concern for patients undergoing cardiac surgery procedures. A recent retrospective analysis of more than 16,000 patients with no history of atrial fibrillation who underwent CABG surgery found an association between new onset postoperative atrial fibrillation and a 21 percent relative increase in mortality, with the greatest negative impact seen in the long-term survival of women.

CorMatrix ECM for pericardial closure received 510(k) clearance from the FDA in 2006 for the reconstruction and repair of the pericardium. It supports tissue remodeling by allowing native cells to migrate and attach within the ECM. The body's natural healing processes result in the material being gradually resorbed and replaced by native tissue. Preclinical data suggest that reformation of the pericardial space provides a solution for surgeons to reconstruct the pericardium and restore the normal anatomic structure.