Results from the TARGET FFR study reported at TCT Connect 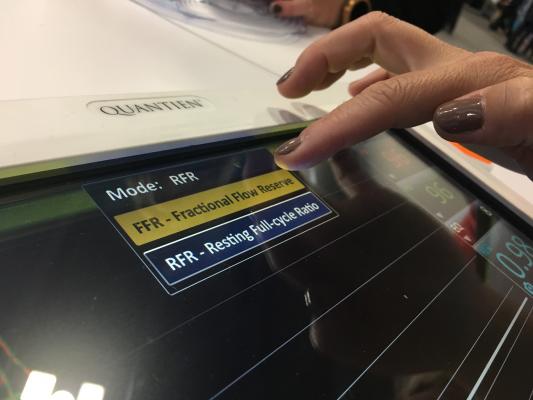 October 23, 2020 – Results from the randomized controlled TARGET FFR trial show that while a physiology-guided percutaneous coronary intervention (PCI) optimization strategy did not achieve a significant increase in the proportion of patients with final fractional flow reserve (FFR) ≥0.90, it reduced the proportion of patients with a residual FFR ≤0.80 following PCI.

“When assessing the proposed optimal post-PCI FFR cutoff value of ≥0.90, we found that the majority of patients with angiographically acceptable PCI results actually have a physiologically suboptimal outcome,” said Damien Collison, M.D., interventional cardiologist at the Golden Jubilee National Hospital, Glasgow, Scotland. “Up to 30% of patients may even have a final FFR result that remains below the guideline-directed threshold for performing revascularization in the first place. In our randomized controlled trial, application of an FFR-guided optimization strategy after stenting led to improvements in both FFR and CFR and significantly reduced the proportion of patients with a final post-PCI FFR ≤0.80.”

The trial’s primary endpoint was defined as the proportion of patients with a final post-PCI FFR result ≥0.90. The study found that the incidence of final FFR ≥0.90 was 10% higher in the PIOS group than the control group but that the difference was not statistically significant (38.1 vs. 28.1%, p=0.099). However, the study’s secondary endpoint, the proportion of patients with final FFR ≤0.80, was significantly lower in the PIOS group (18.6 vs. 29.8%, p=0.045).

Based on FFR pullback assessment of the stented vessel, a target for further optimization was present in 60 of the 131 (46%) patients randomized to PIOS, and operators considered it appropriate to perform additional post-dilatation +/- stenting in 40 of these 60 (66%) patients. Among patients who had further intervention/optimization performed, mean post-PCI FFR increased significantly from 0.76 to 0.82 (p<.001) and mean coronary flow reserve (CFR) increased from 3 to 4 (p=.02).