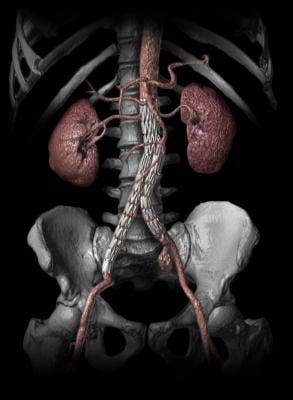 November 18, 2014 — Pierre Galvagni Silveira, M.D., Ph.D., from the Federal University of Santa Catarina in Florianopolis, Brazil, enrolled the first two patients in the Gore Thoracoabdominal Aortic Aneurysm Clinical Study. This initial feasibility study of the Gore Excluder Thoracoabdominal Branch Endoprosthesis will assess the safety of the device implantation procedure in the treatment of abdominal aortic aneurysms encroaching on or involving visceral branch vessels.

Currently, treatment options for patients with abdominal aortic aneurysms involving the visceral segment are limited, with physicians often having to rely on endovascular devices that are not designed for this purpose. The Gore Thoracoabdominal Study seeks to assess the feasibility of Gore Excluder Thoracoabdominal Branch Device. The system of devices is designed to provide physicians with a complete “off-the-shelf” endovascular solution for aortic aneurysms encroaching on or involving the visceral section of the aorta.

Deployed via an intuitive staged delivery system, the device gives endovascular surgeons the ability to reposition the partially deployed graft to aide in selective catheterization of the branches. The Gore Excluder Thoracoabdominal Branch Endoprosthesis includes four pre-cannulated portals for placement of stent-graft branches for the visceral branch vessels, intended to enable a faster, more precise implant.

Gore intends to follow this Phase 1 clinical study in Brazil with an early feasibility study in the United States.

Gore has achieved several other key milestones in its commitment of providing the most complete portfolio of products intended to durably treat the aorta. The Gore Tag Thoracic Branch Endoprosthesis received FDA approval earlier this year for an investigational device exemption (IDE) trial in the treatment of thoracic aortic aneurysms that require coverage of the left subclavian artery (LSA). Gore also recently gained approval to begin another early feasibility study for the GORE TAG Thoracic Branch Endoprosthesis through the FDA’s Innovation Pathway Program to assess the treatment of Zone 0/1 aortic arch aneurysms. In October 2013, the Gore Excluder Iliac Branch Endoprosthesis received CE mark for the treatment of common iliac artery aneurysms and is currently enrolling an IDE study in the U.S.