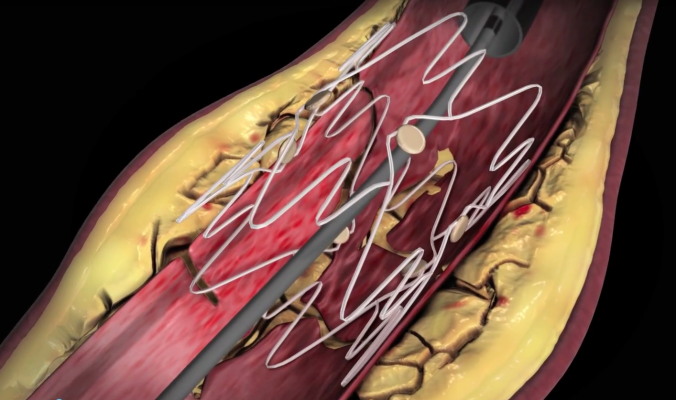 March 22, 2016 — PinnacleHealth CardioVascular Institute enrolled the first patient in Pennsylvania into the TOBA II clinical on Oct. 19, 2015. This trial is to assess the safety and efficacy of a vascular implant for the treatment of dissections (tearing in the artery wall) that occur following balloon angioplasty (PTA) of the main artery in the leg.

The TOBA II study is designed to enroll 210 subjects at up to 40 sites in the United States and Europe. William Bachinsky, M.D., FACC, medical director of vascular services at PinnacleHealth CardioVascular Institute, serves as principal investigator locally at PinnacleHealth.

The first Pennsylvania patient is from the Harrisburg area and was unable to walk more than a short distance before the procedure without feeling symptoms. All study subjects in TOBA II suffer from advanced peripheral artery disease in one or both legs. They are treated with the Tack Endovascular System following standard balloon angioplasty or drug-coated balloon angioplasty in the superficial femoral and proximal popliteal arteries when a dissection occurs.

The Tack implant supports the specific area of dissection and allows the vessel to heal, while preserving the areas that are open and don’t require additional treatment such as stenting. This “Tacking” approach minimizes the metal left in the artery and the vessel inflammation that can result from traditional stenting.

“We are very excited about having this cutting-edge technology available at PinnacleHealth for patients with claudication — or pain in the legs — due to leg artery blockages,” said Bachinsky. “The Tack implant could be a game-changer by reducing the re-narrowing that can be seen following PTA, allowing for greater flexibility within the artery, and potentially reducing the risk for implant fracture.”