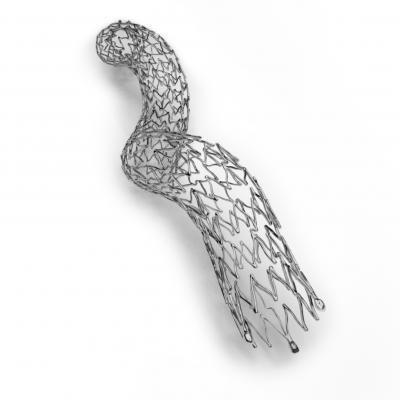 July 17, 2015 - Veryan Medical announced that the first subject has been enrolled in their MIMICS-2 study at Universitäts-Herzzentrum Freiburg in Bad Krozingen, Germany by the European principal investigator, Prof. Thomas Zeller.

The BioMimics 3D femoropopliteal stent is a self-expanding, nitinol stent with unique three-dimensional helical geometry designed to address the link between blood flow mechanics and vascular disease. The stent's helical curvature imparts a natural curvature to the diseased artery, promoting secondary (swirling) flow and elevated wall shear stress, which has a protective effect on the endothelium.

The helical geometry of BioMimics 3D is also designed to enable coil-spring shortening of the stented segment during knee flexion and mitigate the risk of stented segment compression, causing localized strains that in a straight stent may lead to stent fracture and chronic vascular injury.

MIMICS-2 is a prospective, single-arm, multicenter clinical trial of the BioMimics 3D Stent System - being conducted under an investigational device exemption (IDE) approved by the U.S. Food and Drug Administration (FDA) - which will enroll 280 subjects in up to 40 sites in the United States and Germany. The U.S. principal investigator is Timothy Sullivan, M.D., chairman of vascular/endovascular surgery at Minneapolis Heart Institute at Abbott Northwestern Hospital.

The purpose of MIMICS-2 is to provide data to support a U.S. premarket approval application (PMA). It will evaluate BioMimics 3D against the performance goals defined by VIVA Physicians Inc. for the safety and effectiveness of nitinol stents used in the treatment of symptomatic disease of the femoropopliteal artery.

Professor Zeller, who was also the PI of the company's Mimics randomized controlled study commented: "The Mimics study data suggested the existence of a patency protective effect provided by the biomimetic characteristics of the BioMimics 3D stent. I am delighted that we have enrolled the first subject today in MIMICS-2 so that BioMimics 3D can be studied in a larger patient cohort."

In the Mimics Study, the Kaplan Meier (KM) survival estimate of freedom from loss of primary patency at two years was 72 percent for BioMimics 3D subjects vs. 55 percent for the control arm. The difference in survival estimate between the two groups by log rank test was significant (P<0.05). Importantly, there was no increase in the KM estimate of clinically driven target lesion revascularization (CDTLR) rate in the BioMimics arm between 12 and 24 months (9 percent at both time-points) compared to a three-fold increase (8 percent at 12 months and 24 percent at 24 months) in the straight stent control arm.