Getting to the Heart of Chemotherapeutic Cardiotoxicity

Brian C. Jensen, associate professor of medicine and pharmacology in the Department of Medicine’s Division of Cardiology, speaks about his research on kinase inhibitor cardiotoxicity 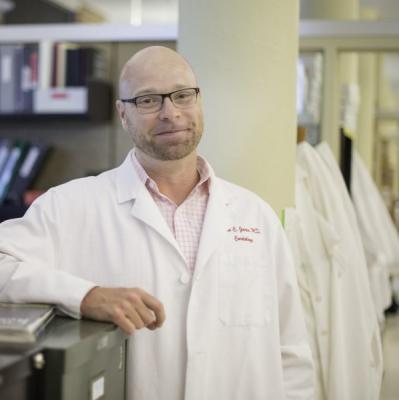 January 16, 2023 — On any given Tuesday, you will find Brian C. Jensen, MD, cardiologist and physician-scientist, tending to patients in his cardio-oncology clinic. His schedule is packed to the brim with cancer patients. But not patients with heart cancer.

The largest number of patients he sees are cancer patients who have developed, or are at risk of developing, heart damage in response to their chemotherapy regimens. This type of heart damage, called cardiotoxicity, is a major cause of drug failure along different stages of drug development.

Jensen, who came to the UNC School of Medicine in 2009, started the clinic in 2015 to help patients in a challenging situation.

“I started the cardio-oncology clinic because I recognized that patients who experience cardiovascular issues while receiving cancer treatment face a very challenging situation and I wanted to help them,” said Jensen, who is an associate professor of medicine and pharmacology in the Department of Medicine’s Division of Cardiology. “My investigative focus on cardio-oncology arose from a clinical observation, when I took care of a patient who had developed cardiotoxicity after being treated with a kinase inhibitor that I had been studying in my lab for years as part of another project.”

Kinases are proteins that aid in the transfer of a certain molecular group – called phosphates – to other proteins to alter their activity, stabilize them, or mark them for destruction. Many of these molecules control critical cellular process throughout our body such as cellular division, cellular signaling, and mediating numerous important functions in the heart.

Given that some kinases promote cellular survival and proliferation, they can also contribute to the development and growth of cancer. For this reason, numerous cancer therapies have been developed that directly target, or limit, the molecules’ function, hence the name “kinase inhibitors.” But it’s crucial to note that only certain types of cancer treatments and kinase inhibitors are associated with a meaningful risk of cardiotoxicity.

Jensen says that a risk of cardiotoxicity can be influenced by a patient’s co-morbidities and general health status, in addition to the medication target and genomic make-up of the patient.

“Some kinases are targeted therapeutically to treat cancer, but don’t serve particularly important roles in the heart,” said Jensen. “Whereas, other kinases that are targeted to treat cancer are quite important to heart health. We all respond differently to different drugs, which is driven by our genomic makeup. So, that’s at play, too.”

Historically, cardiotoxicity screening in drug development has only evaluated the potential risk of a certain type of arrhythmia, also known as an abnormal heart rhythm. However, kinase inhibitors and other cancer therapies can cause other types of cardiovascular injury. These potential adverse effects include direct damage to the heart muscle, which can cause heart failure, or to the vascular tissue, which can cause hypertension.

As these adverse effects have become more and more recognized, the past few years have seen increasing awareness of the need to test for other potential toxicities in pre-clinical animal research. The U.S. Food and Drug Administration, for example, has become more conscious of the importance of expanding cardiotoxicity screening in pre-clinical and pre-approval contexts, thanks in part to research like Jensen’s.

“Given the importance of bringing novel cancer therapies to market, it is really critical to strike a thoughtful balance between adequately ‘de-risking’ candidate compounds for cardiotoxicity and not imposing regulatory boundaries that unduly delay the availability of new effective treatments,” said Jensen.

The same questions that Jensen is bringing to light are becoming more widely acknowledged in both clinical and scientific circles. Recently, the National Institutes of Health released a Notice of Special Interest, or a special call for submissions, focused on studying the molecular underpinnings of cardiotoxicity.

It Takes A Team

Cardio-oncology is an inherently multidisciplinary field. In his cardio-oncology clinic, Jensen works directly with his clinical colleagues in the Divisions of Hematology and Oncology to balance the potential cardiovascular risks with the known therapeutic benefits of kinase inhibitors.

The science of cardio-oncology is equally collaborative and multidisciplinary. Five years ago, Jensen and Gary L. Johnson, PhD, Kenan Distinguished Professor in the Department of Pharmacology and a leader in the UNC Lineberger Cancer Center, won a Team Translational Science Award through the North Carolina Translational and Clinical Sciences (NC TraCS) Institute to explore the molecular basis of kinase inhibitor cardiotoxicity.

This award supported two subsequent publications and Jensen’s recent submission of a large independent research grant proposal (R01) to the National Institutes of Health, on which William Kim, MD, a professor of medicine in the Division of Oncology, is a co-investigator.

The Jensen lab is now investigating the impact of kinase inhibitors on heart muscle cells using cell culture and animal models in partnership with other UNC researchers, such as Jonathan Schisler, PhD, assistant professor of pharmacology. The current focus of this research is the impact of kinase inhibitors on mitochondria and cellular metabolism.

Jensen is excited about ongoing multidisciplinary research in this area and recently has been exploring a new collaboration with Shawn Gomez, PhD, a professor of biomedical engineering and pharmacology at the UNC School of Medicine. This new project would unite Gomez’s expertise in computational biology and the Jensen lab’s understanding of cardiac pathophysiology to predict the potential cardiotoxicity of combination kinase inhibitor therapies in the pre-clinical setting.

Through such collaborations, Jensen hopes to gain new, clinically relevant knowledge about cardiotoxicity to inform his practice in the clinic. “The notion that findings generated by our research program might someday help to reduce the burden of cardiotoxicity is incredibly inspiring to me,” said Jensen.