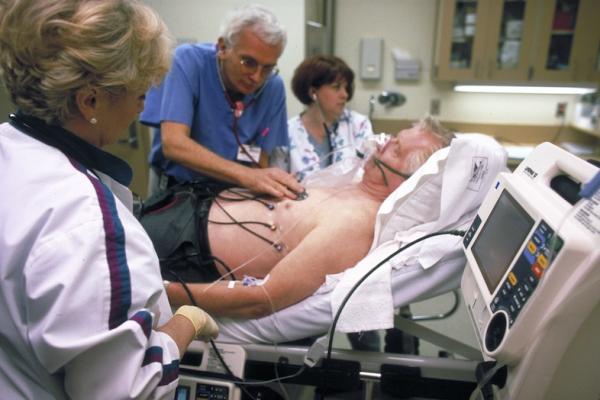 December 21, 2018 — Older adults with cancer are more likely to have had a heart attack or stroke in the months prior to their cancer diagnosis, according to a report published online in Blood.1 The study compared this group with similar adults who do not have cancer during the same period. Lung and colon cancers, as well as advanced-staged cancers, appear to be most strongly associated with an elevated risk of heart attack and stroke caused by blood clots in the arteries.

The study is the largest and most systematic evaluation of these events leading up to a cancer diagnosis, according to researchers at Weill Cornell Medicine, NewYork-Presbyterian, and Memorial Sloan Kettering Cancer Center in New York City.

"Our data show there is an associated risk of ischemic stroke and heart attack that begins to increase in the five months before the cancer is officially diagnosed and peaks in the month just before," said lead study author Babak Navi, M.D., MS, an associate professor of neurology in the Department of Neurology and of neuroscience in the Feil Family Brain and Mind Research Institute at Weill Cornell Medicine, and a neurologist at NewYork-Presbyterian/Weill Cornell Medical Center. "These results suggest that cancer's effect on the clotting system may be what's predominantly driving the associated risk of heart attacks and stroke."

Cancers can take months and sometimes years to develop and be diagnosed, and some cancers may be exerting biological effects on the body, especially thromboembolic activity, before they come to medical attention, he explained.

Researchers used information from a Medicare database linked to the Surveillance, Epidemiology, and End Results (SEER) registry. They retrospectively looked at the risk of heart attack and stroke in people 67 years and older who were newly diagnosed with breast, lung, prostate, colorectal, bladder, non-Hodgkin lymphoma, uterine, pancreatic, and gastric cancers from Jan. 1, 2005, to Dece. 31, 2013. Together, these cancers account for two-thirds of all cancer diagnoses in the United States. The study included 748,662 Medicare beneficiaries and compared patients with cancer to matched controls during the 360 days before the cancer diagnosis.

Overall, the risk of having a heart attack and stroke jumped by 70 percent in the year before cancer diagnosis. The risk was most acute in the month immediately before cancer diagnosis. During this time, patients who were later diagnosed with cancer were more than five times more likely to have a heart attack or stroke compared with those who did not have cancer – 2,313 of cancer patients had an event compared with 413 of matched controls. Beyond five months before a cancer diagnosis, the risks of these events were similar in both groups. The rate of heart attack or stroke was highest in adults with lung and colorectal cancers and those with stage 3 or 4 disease. When analyzed separately, both heart attack and stroke risk were increased in the months before cancer diagnosis, although heart attack events were slightly more common than strokes. Secondary analyses of additional arterial thromboembolic event types (i.e., thromboembolism of arteries supplying the peripheral limbs or mesentery) further substantiated the primary findings.

The data confirm the association of heart attack and stroke with cancer development and delineate when the risk starts and its relative magnitude, said Navi, who is also chief of the Division of Stroke and Hospital Neurology in the Department of Neurology at Weill Cornell Medicine and NewYork-Presbyterian/Weill Cornell.

"Our findings suggest that cancer could be a risk factor for arterial thromboembolism, so people who have a heart attack or stroke should be up-to-date with their age- and gender-specific cancer screenings, such as mammograms and colonoscopies," Navi added. "If someone has a heart attack or stroke and there are any concerning signs for an undiagnosed malignancy, such as weight loss or unexplained anemia, then perhaps a cancer screening should be considered."

Navi and his team are planning future research studies to better understand what blood or imaging biomarkers could serve as clues to occult cancer in patients with arterial thromboembolism, as well as what the utility of body computed tomography (CT) imaging or other cancer screening tools might be in these patients, particularly in those whose strokes or heart attacks are otherwise unexplained. Navi also stressed that more investigations are needed to determine the exact cause of arterial thromboembolism in patients with cancer and the optimal strategies to prevent and treat these events.

The use of claims data did not allow the researchers to account for lifestyle factors, such as smoking status, event severity or how interruptions in blood thinning therapies prior to surgical procedures may have played a role. As well, some of the events could have led to a cancer diagnosis because of increased medical surveillance and testing.

This study was funded by the National Institutes of Health.