Investigations in Japan have uncovered some molecular mechanisms behind mitochondrial dysfunction in chronic heart failure. 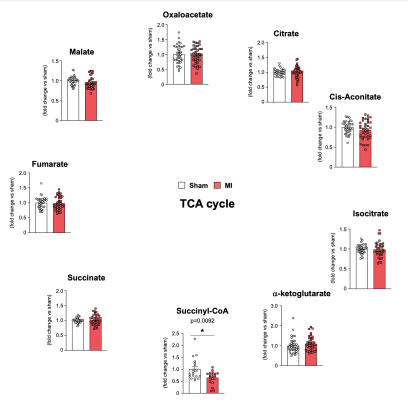 Fig. 1. Selective reduction of succinyl-CoA among the TCA cycle metabolites in cardiac muscle during chronic HF. Relative levels of the TCA cycle metabolites in cardiac muscles isolated from myocardial infarction (MI) mice, compared with those from sham mice, 28 d after surgery. Each data point in the dot plot represents one individual mouse sample (n = 38 for both groups for all metabolites, except for succinyl-CoA in which n = 18 for both groups). Concentrations of succinyl-CoA in these samples were 2.2–50 pmol/mg wet weight. Data are shown as the mean ± SEM. Significances between groups were tested using the unpaired t test, and indicated by asterisks (*P < 0.05). Courtesy of pnas.org

November 3, 2022 — Chronic heart failure causes the cell’s powerhouses to dysfunction, in part due to overconsumption of an important intermediary compound in energy production. Supplementing the diet to compensate for this could prove a promising strategy for treating heart failure. The findings were published in the journal PNAS by Hokkaido University scientists and colleagues in Japan.

Mitochondria are small organelles found in almost every cell and are responsible for converting carbohydrates, fats and proteins into energy to power biochemical reactions. Chronic heart failure is known to be associated with mitochondrial dysfunction, but much is still unknown about how this happens at the molecular level.

A research team consisting of molecular biologist Hisataka Sabe (Hokkaido University), cardiovascular medicine specialists Shingo Takada (Hokkaido University and Hokusho University) and Shintaro Kinugawa (Kyushu University) and their colleagues studied the biochemical processes that occur in mice with chronic heart failure caused by surgically blocking part of the blood supply to their hearts. They specifically looked at heart cells outside the boundaries of dead tissue.

They found a significant reduction in a compound called succinyl-CoA, which is an intermediary in the cell’s tricarboxylic acid cycle. This cycle, which happens inside mitochondria, plays an important role in breaking down organic molecules to release energy.

Further investigations revealed that this reduction of succinyl-CoA levels was at least in part caused by its overconsumption for the synthesis of heme, which is essential for mitochondrial oxidative phosphorylation. This latter process is needed for transferring and synthesizing energy-carrying and storage molecules by mitochondria.

Adding a compound called 5-aminolevulinate acid (5-ALA) to the drinking water of mice immediately after cutting off the blood supply to part of the heart significantly improved their heart function, treadmill running capacity and survival. At the molecular level, it improved the oxidative phosphorylation capacity of heart muscle mitochondria and appeared to restore their succinyl-CoA levels.

Further research is needed to clarify other factors involved in reducing mitochondrial succinyl-CoA levels in heart failure. For example, the scientists found evidence that succinyl-CoA may also be overconsumed in heart failure-affected mitochondria in order to break down ketones as a source of energy. But more investigations are needed to understand why this might happen and whether there really is a direct link between the two.

“Our results further the understanding of the detailed metabolic changes that occur in chronic heart failure and could contribute to the development of more natural prevention and treatment for the condition,” say the team members. “In addition, a combination of nutritional interventions that can correct the metabolic distortions that occur in chronic heart failure—as revealed in this study—and currently used therapeutic drugs could be very effective in the treatment of this disease.”