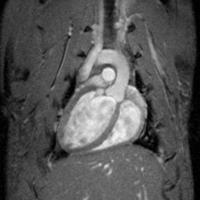 September 16, 2011 — Researchers from Mount Sinai School of Medicine have for the first time used several imaging techniques to prove the efficacy of a promising new treatment for atherosclerosis. The disease causes build-up of plaque in artery walls that can lead to a heart attack.

Using positron-emission tomography (PET)/computed tomography (CT) and magnetic resonance imaging (MRI), the research team showed that dalcetrapib, a novel treatment for atherosclerosis, prevented the progression of disease and reduced vascular inflammation; the results were noted over 24 months. The data are published in the September 12 issue of The Lancet.

The dal-PLAQUE study is the longest placebo-controlled, active-drug MRI study to date, and the first to use a variety of noninvasive imaging techniques to visualize arterial plaque.

“This milestone study shows that MRI and PET/CT are highly useful in assessing the safety and efficacy of dalcetrapib, and that this novel therapy may address a significantly unmet need in cardiovascular disease,” said Zahi A. Fayad, Ph.D., professor of radiology and medicine in the division of cardiology, and the director of the Translational and Molecular Imaging Institute at Mount Sinai School of Medicine, and lead author on the study. “We are excited about the results obtained in this trial, which could have a great impact on the treatment of patients with cardiovascular disease.”

Lowering of the so-called bad cholesterol (low-density lipoprotein) through statin use is a highly effective method of improving cardiovascular outcome in a broad range of patients. However, despite optimal use, significant risk remains.

In the dal-PLAQUE study, patients who received dalcetrapib saw a 31 percent increase in HDL cholesterol levels, as examined through MRI. The PET/CT scans showed inflammation levels in the carotid artery of those same patients were significantly reduced, yet stayed the same in the placebo group.

“Considering the concerns surrounding this class of drugs, MRI and PET/CT imaging are valuable biomarkers for assessing safety and efficacy,” said Fayad. “The first drug in this class, torcetrapib, effectively increased HDL cholesterol but caused a significant increase in mortality due to vascular inflammation. Through noninvasive imaging, we were able to determine that the inflammation associated with torcetrapib was not found in dalcetrapib. The success of this trial indicates that noninvasive imaging may be a critical tool for evaluating other investigational treatments for heart disease as well.”

Mount Sinai is establishing a center that will use state-of-the-art imaging technology to help treat and prevent atherosclerosis, heart attack, and heart failure. In collaboration with the Mount Sinai Cardiovascular Institute and Mount Sinai Heart, the new Translational and Molecular Imaging Institute will continue to innovate, validate and translate new tools for the improvements of patients care.

Fayad receives financial compensation as a scientific advisory board member for F. Hoffman-La Roche Ltd, the sponsor of this study.