Update from the prevention of arrhythmia device infection trial (PADIT) 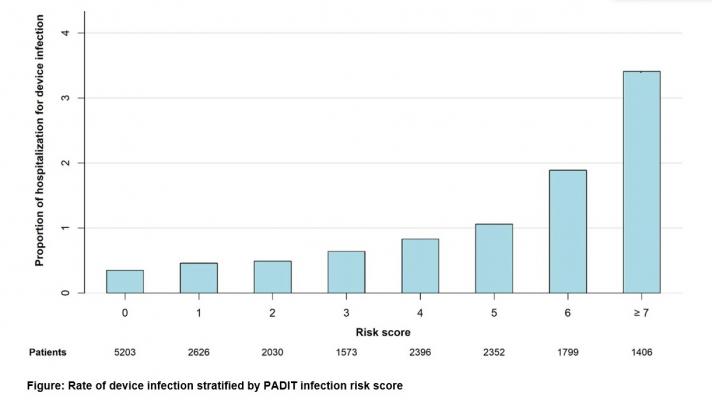 May 15, 2019 — A new infection risk scoring system has been developed based on data from the large PADIT Trial.[1] The new scoring system was presented as a follow up to that study during a late-breaking session at Heart Rhythm 2019, the Heart Rhythm Society's 40th Annual Scientific Sessions.

"We developed a novel infection risk score in the largest cardiovascular implantable electronic device (CIED) trial to date, with five independent predictors that are readily adopted into clinical practice," explained Andrew D.. Krahn, M.D., FHRS, professor in the Division of Cardiology at the University of British Columbia, who presented the study. He said the PADIT infection score warrants validation in an independent cohort study.

CIED infection is a major complication, usually requiring device removal. The Prevention of Arrhythmia Device Infection Trial (PADIT) was a large cluster crossover trial of standard versus incremental antibiotics. Krahn said the study sought to investigate independent predictors of device infection in PADIT and develop a novel infection risk score. Device procedures were performed in 19,603 patients and hospitalization for infection occurred in 177 (0.90%) within one year.

Over four six-month periods, 24 centers used either conventional or incremental antibiotic treatment in all patients. The primary outcome was hospitalization for device infection within one year with blinded end-point adjudication. Multivariable logistic prediction modeling was used to identify the independent predictors and develop a risk score for device infection. The model was internally validated with bootstrap methods.

The risk groups had rates of hospitalization for infection of 0.51%, 1.42% and 3.41%, respectively (also see figure 1). Subgroup analysis by PADIT infection risk score of the two antibiotic regimes showed no treatment effect (pinteraction = 0.37).