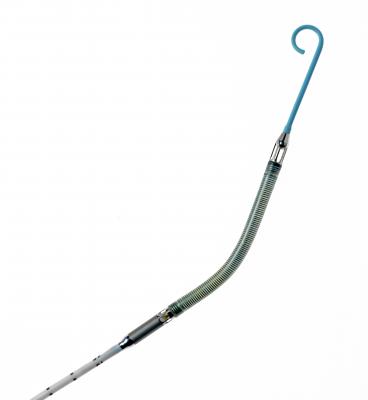 January 3, 2017 — The Impella CP heart pump (Abiomed) demonstrated no improvement in mortality for patients with myocardial infarction and cardiogenic shock compared to intra-aortic balloon (IABP) counterpulsation in results from the prospective, randomized, multi-center IMPRESS Trial presented at Transcatheter Cardiovascular Therapeutics (TCT) 2016.  However, the trial was limited to 48 patients and was too underpowered to show differences in clinical outcome,  but was completed as an exploratory safety study.

The study found Impella CP did not reduce 30-day mortality compared with the IABP, according to the results. The results were simultaneously published in the Journal of the American College of Cardiology.[1]

Dagmar M. Ouweneel, MSc, et al., conducted a randomized, prospective, multi-center trial to determine whether the Impella CP – a new percutaneous circulatory device that provides increased hemodynamic support – would decrease 30-day mortality compared to the intra-aortic balloon pump. The 48 patients in the trial had severe cardiogenic shock complicating acute myocardial infarction. The results of the trial showed that the 30-day mortality was similar in patients treated with the Impella CP or the intra-aortic balloon pump (46 vs. 50 percent). At six-months, the mortality rates for both were 50 percent. The trial was designed and sponsored by the Academic Medical Center, Amsterdam.

Based on previous studies and from the authors' experience in severe shock patients where survival is under 10 percent, they assumed the Impella treatment would decrease the absolute 30-day mortality rate from 95 to 60 percent. They were surprised to find both arms of the study had similar results.

While the study was underpowered, it is thus far the largest trial to randomly compare the newer Impella CP device and IABP, the authors said. The authors said while the study was not adequately powered, the trial suggests that in patients with cardiogenic shock without selection on age, ROSC times and pre-procedural traumatic injuries, no clear signal of superior outcome was observed in patients with Impella CP support when compared with the IABP.

The data show there were more bleeding events during admission in the Impella group than in the IABP group (8 vs. 2). There also were 2 patients in which the presence of hemolysis influenced the decision to stop the Impella support.

"In the small, underpowered IMPRESS study, nearly half of the population of patients died of complications related to anoxic encephalopathy highlighting the hazard of including these patients in comparative trials to assess optimal strategies," said Seth Bilazarian, M.D., chief medical officer, Abiomed. "This is the first and only study of patients in cardiac arrest with cardiogenic shock. The trial outcome is expected from a small sample of 24 Impella treated patients, with cardiac arrest and mechanical ventilation as inclusion criteria. Despite these inclusion criteria, not all the patients in the IABP arm met the cardiac arrest criteria. The study was also fraught with challenges related to study arm crossover to Impella."

Bilazarian went on to say the study failed to follow best practices for using the Impella platform, because it included use of hemodynamic support after PCI instead of before. In IMPRESS, the group of 8 patients, who received mechanical circulatory support prior to PCI showed a strong trend toward improved survival, consistent with what has been demonstrated in the global cVAD registry, he said.

This is the third trial to show Impella did not have superiority over IABPs. In 2008, the ISAR-SHOCK trial showed that hemodynamic support increased at 30 minutes with Impella, but 30-day mortality was the same in the Impella and IABP study groups.[2] That trial was also small, with about 26 patients. The 2010 high-risk PCI PROTECT II trial showed the 30-day incidence of major adverse events was not different for patients with IABP or Impella 2.5 hemodynamic support.[3] However, the authors of that study said there were trends for improved outcomes in Impella 2.5-supported patients at 90-days. after determining the study could not reach its primary endpoint of a difference in 30-day adverse events. That study was discontinued after review of the interim data, which showed futility in in the trial in showing improved outcomes between the devices.

The Impella platform is the only FDA cleared product for hemodynamic support in cardiogenic shock. At the start of the trial, in Europe IABPs were a Class II (may be considered) recommendation, but this changed during the course of the trial to Class III (not recommended). IABP usage in the American guidelines is a Class IIb recommendation. The authors state in the study the lack of efficacy of the IABP is likely, at least part, the reason for the observed increased usage of more potent mechanical circulatory devices such as the Impella. In the U.S., IABPs were grandfathered and did not require efficacy trials because they were pre-existing devices from the 1970s, prior to the establishment of the current FDA review process for medical devices.