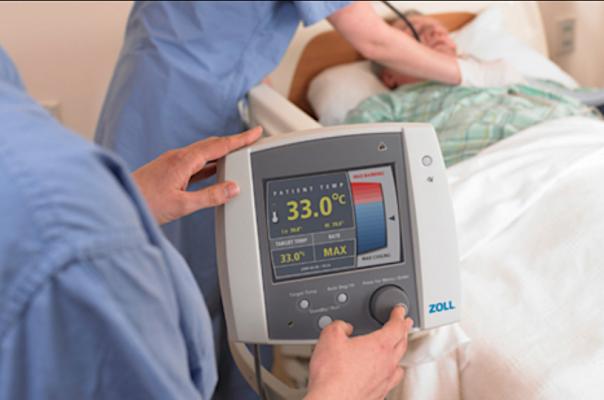 May 17, 2021 — In patients receiving therapeutic hypothermia after suffering out-of-hospital cardiac arrest, those who were cooled below 31 degrees Celsius (about 88 degrees Fahrenheit) for 24 hours showed no difference in terms of death or poor neurological outcomes at six months compared with patients receiving guideline-recommended cooling of 34 C (about 93 F). These findings are part of a study presented at the American College of Cardiology (ACC) 2021 scientific session.

Therapeutic hypothermia is a procedure in which a person’s body is cooled far below normal body temperature. It has been shown to improve survival and reduce brain damage in people who have been resuscitated but remain comatose after suffering cardiac arrest. Current guidelines for therapeutic hypothermia recommend cooling the body to 32-36 C for 24 hours. The new study found no benefit from a deeper cooling to 31 C.

“The results of our trial do not support the use of moderate therapeutic hypothermia of 31 C to improve neurological outcomes in comatose survivors of out-of-hospital cardiac arrest,” said Michel R. Le May, M.D., interventional cardiologist at the University of Ottawa Heart Institute and the study’s lead author. “These findings do not support changing the current guidelines; we need to look for other strategies that can improve outcomes for these patients who currently have a poor prognosis.”

The trial enrolled 367 patients treated for out-of-hospital cardiac arrest at the University of Ottawa Heart Institute between 2013-2020. All patients had been successfully resuscitated, as indicated by a return of blood pressure, but remained comatose. Participants were cooled with an endovascular device that uses temperature-controlled saline-filled balloons inserted near the heart via a vein to alter a patient’s body temperature. For half of the patients, the endovascular device was set to cool the body to 31 C and for the other half the device was set to 34 C. Once the target temperature was achieved, the temperature was maintained for 24 hours before the patient was warmed up to normal body temperature at a rate of 0.25 degrees per hour.

The study’s primary endpoint, a composite of death or poor neurological outcome at six months, occurred in 48% of those cooled to 31 C and 45% of those cooled to 34 C, a difference that was not statistically significant. There was also no significant difference between groups in terms of the rate of death or the rate of poor neurological outcome when these outcomes were assessed individually. The researchers examined outcomes by sex, age and other variables but found no significant differences in any subgroups analyzed.

Patients cooled to 31 C on average had a longer stay in the cardiac intensive care unit, which Le May said may reflect the fact that both the cool-down and warm-up periods lasted longer for these patients due to the lower target temperature.

Other researchers have assessed whether different temperatures or durations of therapeutic hypothermia can improve outcomes, but these previous studies have similarly demonstrated no improvement over current guidelines. Moving forward, Le May suggested brain monitoring approaches could be used to inform which strategies may be best suited for each patient’s particular situation.

“It may be useful to pool all these studies together and try to figure out if there is a particular temperature that’s more suitable in particular cases,” Le May said. “We also have to find better, noninvasive tools to assess the brain and perhaps turn our attention toward a more personalized way of treating these patients. This would allow us to select the protocol that optimizes the benefit for a particular patient.”

Le May said that many key elements influencing survival after out-of-hospital cardiac arrest come into play before the patient reaches the hospital, including whether bystanders administer basic CPR, how quickly paramedics arrive on the scene and how quickly patients are transferred to specialized cardiac centers. Focusing on these factors could offer opportunities to further improve survival, he said. The study was conducted at a single center, which may limit its generalizability but was helpful in ensuring consistent treatment protocols, Le May said.

The study was funded by the University of Ottawa Heart Institute.