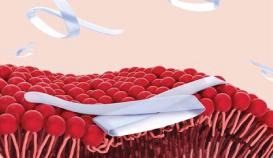 June 10, 2014 — Mast Therapeutics Inc. announced that, in a placebo-controlled, nonclinical model of chronic heart failure, MST-188 demonstrated a statistically significant improvement in numerous parameters of heart function, including left ventricular ejection fraction and end-systolic volume, stroke volume and cardiac output. Notably, a single two-hour infusion of MST-188 resulted in improvements that were significant immediately (at the end of MST-188 administration) and remained significant at one week (and, in some cases, at two weeks) after MST-188 administration.

Hani N. Sabbah, Ph.D., professor of medicine & director of cardiovascular research at Henry Ford Health System in Detroit, said: "These data clearly show that MST-188 improves left ventricular ejection fraction and end-systolic volume, both of which are important indicators of long-term mortality and morbidity in chronic heart failure, with some effects lasting up to two weeks post-infusion. The durability of response is very encouraging and merits clinical investigation."

Santosh Vetticaden, M.D., Ph.D., chief medical officer of Mast Therapeutics, said: "Heart failure is an area of significant unmet medical need that accounts for over 1 million hospitalizations every year in the U.S. alone. Although there have been modest improvements in treatment, heart failure remains associated with significant mortality and high rates of hospital admission and readmission. We look forward to discussing these results with heart failure experts and potential partners and mapping our clinical development strategy in this exciting new indication."

The company has submitted data from this clinical study for presentation at an upcoming medical conference and will provide an update on its plans for MST-188 in heart failure later in 2014.

The objective of the study was to determine the effect of acute intravenous administration of MST-188 on left ventricular systolic and diastolic cardiac function in a model of chronic heart failure produced by multiple sequential intracoronary microembolizations. A single dose of MST-188 (low or high dose) or placebo was administered over two hours. Hemodynamic, ventriculographic, echocardiographic and electrocardiographic measurements were taken at baseline (prior to study drug administration) and at the following time-points after the start of study drug administration: two hours (end of administration), 24 hours, one week and two weeks. Peripheral venous blood samples were obtained at the same time-points.  The improvements described above were calculated as the difference between baseline and mean values of each study group at each time-point using a one-way analysis of variance, with p<0.05 considered significant.  The study was conducted under the supervision of Hani N. Sabbah at Henry Ford Health System, a Michigan non-profit corporation.

MST-188 is a cytoprotective, hemorheologic, anti-inflammatory and anti-thrombotic agent that has potential utility in diseases or conditions characterized by microcirculatory insufficiency (endothelial dysfunction and/or impaired blood flow).

The company is enrolling subjects in EPIC, a pivotal phase 3 study of MST-188 in sickle cell disease. In early 2014, the company plans to initiate a phase 2, clinical proof of concept study in acute limb ischemia that will evaluate whether MST-188 improves the effectiveness of existing thrombolytic agents. The company also is evaluating development options in heart failure.