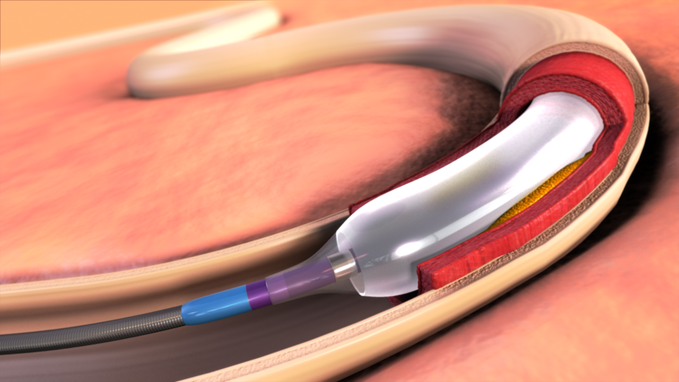 October 14, 2014 — Presented for the first time at the 2014 Transcatheter Cardiovascular Therapeutics (TCT) conference, the latest clinical and economic data on the IN.PACT Admiral drug-coated balloon (DCB) from Medtronic Inc. augments an already robust body of evidence that continues to drive a reconsideration of the standard of care for peripheral artery disease (PAD) in leg arteries above the knee.

The IN.PACT Admiral DCB remains an investigational medical device in the United States. No drug-coated balloon has yet received approval from the U.S. Food and Drug Administration (FDA).

The new data come from the real-world IN.PACT Global study, the largest and most rigorous post-market evaluation of its kind for any peripheral artery intervention, and from an ongoing economic outcomes analysis of the U.S. phase of the landmark IN.PACT SFA trial.

Together, the results show that the IN.PACT Admiral DCB is not only clinically superior, but also cost-effective for the treatment of atherosclerotic lesions in the superficial femoral artery (SFA) or proximal popliteal artery (PPA) at 12 months compared to standard percutaneous transluminal angioplasty (PTA).

Initial findings from the IN.PACT Global study, which will enroll more than 1,500 patients at 67 sites around the world, characterize the performance of the IN.PACT Admiral DCB in a real-world patient population — one with more complex and challenging baseline characteristics than the 331 patients enrolled in the IN.PACT SFA trial. Considering the greater complexity of the patients enrolled in IN.PACT Global, 12-month outcomes for the first 655 patients — including a CD-TLR rate of 8.7 percent — validate the findings from IN.PACT SFA.

“Based on the exceptionally high quality of this real-world, registry-based evidence, the IN.PACT Admiral drug-coated balloon is demonstrating unparalleled outcomes for atherosclerotic lesions in the femoro-popliteal vessel bed,” said Gary Ansel, M.D., system medical director for vascular services at OhioHealth/Riverside Methodist Hospital in Columbus, Ohio. “The clinical community of cardiovascular specialists is increasingly excited about the prospects for this interventional technology for the non-prosthetic treatment of peripheral artery disease.”

An interim one-year report on this ongoing analysis, which has a primary two-year endpoint of total PAD-related costs for the target limb, found that treatment with the IN.PACT Admiral DCB is economically attractive, despite higher initial hospital costs.

The follow-up target-limb related medical care costs from discharge to one year were approximately $750 per patient lower in the DCB group than the PTA group, resulting in an incremental cost-effectiveness ratio (ICER) of about $2,900 per repeat revascularization avoided, which compares favorably to other cardiovascular therapies, including coronary drug-eluting stents.