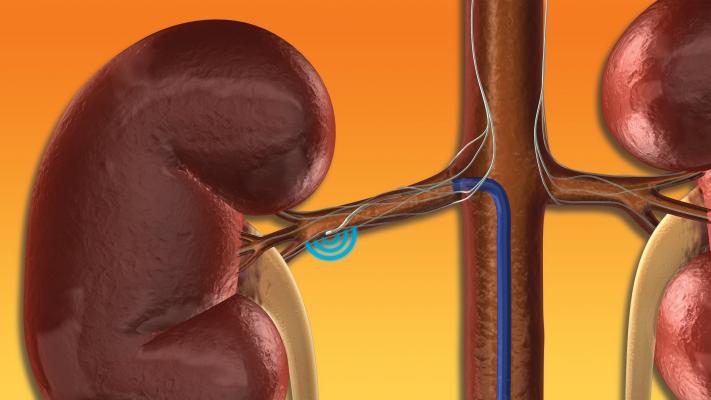 May 23, 2019 – Investigators unveiled late-breaking clinical data from a first-of-its-kind physician sponsored clinical trial at the 2019 EuroPCR Annual Meeting, May 20-23 in Paris, France. The data indicate that renal denervation (RDN) with the Medtronic Symplicity renal denervation system was associated with reduced occurrence of subclinical atrial fibrillation (AF) in a small subset of high-risk patients with hypertensive heart disease over a median follow-up period of more than two years.

The investigator-led study funded by Medtronic randomized 80 patients to either the renal denervation procedure with the Symplicity renal denervation system or a fake “sham” procedure. Renal denervation is a minimally invasive, catheter-based procedure intended to deliver energy to overactive nerves in the kidney, decreasing their activity, which is thought to be a cause of both hypertension and arrhythmias. AF occurrence was monitored by Medtronic implantable diagnostic technology. The results from the study demonstrate subclinical AF developed at a lower rate in the group of patients who received RDN than those receiving the sham procedure (19 percent versus 47 percent).

“In this high-risk cohort of patients with hypertensive heart disease, who are at risk for atrial fibrillation and cardiovascular death, this study suggests there may be an important benefit provided by renal denervation,” said Marshall J Heradien, M.D., cardiologist and specialist physician at Stellenbosch University in Cape Town, South Africa, and principal investigator in the study. “Consistent with previous studies, these data show that the RDN procedure offers a lasting, positive effect that may translate into improved clinical outcomes.”

Investigators also reported new, three-year data from the Global SYMPLICITY Registry (GSR), which is the largest registry documenting the long-term safety and effectiveness of the Medtronic renal denervation systems in a real-world setting in patients with uncontrolled hypertension. To date, the registry has enrolled more than 2,600 patients treated with RDN and includes three-year follow-up for more than 2,300 patients.

The latest outcomes from the registry presented at EuroPCR showed renal denervation led to significant and clinically meaningful reductions in both office and ambulatory blood pressure that were sustained out to three years post-procedure (16.5 mm Hg OSBP and 8.9 mm Hg 24H systolic ABPM). The registry findings showed blood pressure reductions were consistent and sustained across various high-risk patient subgroups, including those with diabetes, isolated systolic hypertension (ISH), chronic kidney disease (CKD), resistant hypertension and those aged 65 years and older.

Hypertension is the single largest contributor to cardiovascular death; it dramatically increases risk of heart attack, stroke, heart failure and kidney failure. The annual direct costs of hypertension are estimated at $500 billion worldwide. It is estimated that almost 20 percent of patients are completely non-adherent to oral medications while nearly half are partially non-adherent, highlighting the need for alternative treatment options.