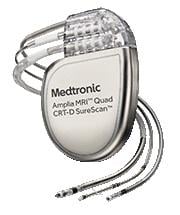 "The ability to provide CRT-D patients with access to MRI scans is a significant, necessary advancement that may help save lives," said Prof. J. Schwitter, cardiologist and director of the Cardiac MR Center at the University Hospital Lausanne, Switzerland. "The most common magnetic field strength for an MRI is 1.5T, particularly for cardiac MRI; however, many institutions are installing 3T scanners to provide increased image clarity for conditions involving the brain and spine. With expanded access to 3T scans, physicians can now use a broader spectrum of MRI machines to most accurately diagnose critical and even life-threatening conditions."

As many as 40 percent of CRT patients will need an MRI within four years after receiving a device. However, until the availability of MR-conditional CRT-Ds, patients with these devices were contraindicated from undergoing MRI scans because of the potential interaction between the MRI and the device function, which could result in risk to the patient. This has prevented thousands of heart failure patients from receiving an MRI scan, an important imaging technology used by doctors to diagnose conditions such as stroke, cancer, Alzheimer's disease, and muscle, bone and joint pain.

The Claria MRI CRT-D features the EffectivCRT Diagnostic and the EffectivCRT during AF algorithm, which automatically adjusts pacing rates, without adversely affecting the average heart rate,  to tailor the therapy to individual patients.

The Claria MRI and Amplia MRI CRT-Ds also feature the AdaptivCRT algorithm, which has been shown to improve CRT response rate by 12 percent and to reduce risk of atrial fibrillation by 46 percent compared to echo-optimized biventricular pacing. They also enable Multiple Point Pacing, which can stimulate two sites on the left ventricle (lower chamber) simultaneously.

Additional features available in all three devices include: