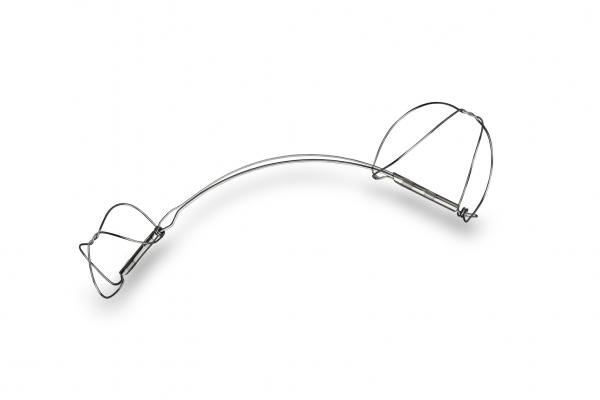 The reduction represented a 22 percent decrease in regurgitation in the treatment group, compared to an overall regurgitation increase of 8 percent in the control group that received a sham procedure (p=0.03). Study patients, the imaging core lab, and the clinical assessors were blinded as to the patients’ randomization group through the one-year follow-up period of the study.

“I am impressed the trial results are consistent with the positive outcomes I’ve seen in my practice,” said Prof. Horst Sievert, M.D., director of the CardioVascular Center Frankfurt, Sankt Katharinen, and the Department of Internal Medicine, Cardiology and Vascular Medicine of the Sankt Katharinen Hospital in Frankfurt, Germany, who presented the results at the conference. “When we designed this study, we knew a blinded, sham-controlled trial would be challenging, but the validity of the results would therefore be very compelling. And it is.”

Cardiac Dimensions also announced at TCT the enrollment of the first patient in the CARILLON Pivotal Trial that will evaluate the Carillon Mitral Contour System in 450 patients at up to 75 centers in North America and Europe.

Marty Leon, M.D., of Columbia University Medical Center/New York-Presbyterian Hospital, chairman of the CARILLON steering committee, said, “The results of this unique but small mechanistic trial are provocative. These data support and will inform the recently launched CARILLON trial, which is also a sham-controlled randomized trial, but it is a much larger pivotal trial with clinical endpoints.”

The REDUCE FMR study also showed those treated with the device experienced fewer major adverse events compared to the control group (16 percent versus 18 percent, respectively). In addition, only 11 percent of the implanted patients experienced recurrent heart failure hospitalizations, which was approximately half the 21 percent rate observed in the control group. However, the trial was not powered to make statistical conclusions in these endpoints.

Klaus Witte, M.D., a heart failure physician from Leeds Teaching Hospital NHS Trusts, a top enroller in the REDUCE FMR study, commented, “Remodeling is important to patients as it has an impact on longer-term patient prognosis and mortality. The remodeling shown in the REDUCE FMR study is compelling and an important aspect to consider when contemplating treatment options for patients.”

The REDUCE FMR Trial included 120 heart failure patients who were randomized to treatment with the Carillon Mitral Contour System (N=87) or guideline-directed medical therapy (control) (N=33). The primary endpoint of the study was to show a significant change in regurgitant volume (a measurement of how much blood pumps back into the atrium) between the Carillon device and the guideline-directed medical therapy (GDMT) group at one year, as assessed by a blinded, independent echo core lab. Additional analyses of heart failure hospitalizations and product safety data were also presented at TCT.

The study’s age criteria was from 18 to 85 with a mean age of patients participating in the study of 70 years. Seventy-two percent were male, 60 percent had atrial fibrillation, and 45 percent had been hospitalized for heart failure within one year prior to their enrollment in the study. The mean regurgitant volume was 39 ml.

The Carillon System is designed to offer physicians a safe and easy-to-use option to treat patients earlier in their disease diagnosis, including those with lesser degrees of FMR (2+ MR grade), to slow disease progression and prevent worsening quality of life. The device treats the dilated mitral annulus, the underlying mechanical problem of FMR, with a catheter-based alternative to medications and invasive surgery. It is a minimally invasive approach that offers patients annular reduction, while keeping adjunctive therapy options open.