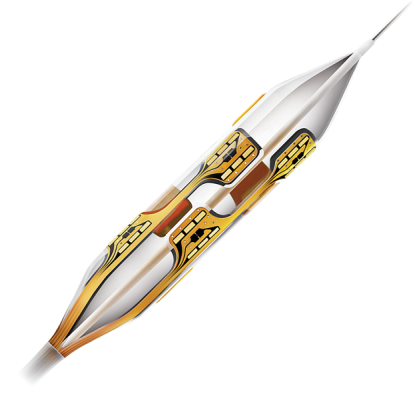 October 31, 2013 — Patients treated with the Boston Scientific Vessix Renal Denervation System experienced a significant and sustained reduction in blood pressure, according to new data presented today at the Transcatheter Cardiovascular Therapeutics Conference (TCT 2013) in San Francisco. An interim analysis of 139 patients enrolled in the REDUCE-HTN post market study affirms the device safety profile and effective treatment for resistant hypertension.
"In the REDUCE-HTN study, 85 percent of patients treated with the Vessix system experienced a clinically-meaningful decrease in blood pressure," said Horst Sievert, M.D., Ph.D., director, Cardiovascular Center Frankfurt, Sankt Katharinen Hospital, Frankfurt, Germany and principal investigator, REDUCE-HTN clinical program.  "In my opinion, the large patient cohort and rigorous analysis of the study suggest that renal denervation using bipolar technology will be an important part of the treatment algorithm for a wide variety of patients with resistant hypertension."
Renal denervation with the Vessix system is a minimally invasive procedure in which a balloon catheter is fed through the arterial vascular system and positioned in the renal arteries, the major blood vessels that lead to the kidneys. The physician then delivers low-power radiofrequency (RF) energy to disrupt the nerves surrounding the renal arteries in which hyperactivity contributes to uncontrolled high blood pressure. The Vessix system is the only renal denervation system to utilize bipolar energy to disrupt these nerves, providing a more localized and precise approach.
The REDUCE-HTN post market study enrolled 146 patients at 23 centers in Europe, Australia and New Zealand and is evaluating the ability of the Vessix System to reduce blood pressure at six months compared to the pre-treatment baseline blood pressure. Patients enrolled in the program are required to have a systolic blood pressure of at least 160 mmHg despite taking three or more antihypertensive medications.
Interim data highlights of the study include:
The Vessix system is a highly differentiated and advanced renal denervation system that features an intuitive push-button interface, a short 30-second treatment time and an over-the-wire, balloon-based approach familiar to most cardiac and vascular specialists.  The Vessix System has both CE mark and Therapeutic Goods Administration (TGA) approval and is currently available for sale in Europe, the Middle East, Australia, New Zealand and select markets in Asia.  The Vessix system is an investigational device and not available for sale in the United States.
For more information: www.bostonscientific.com, www.ccapr.com