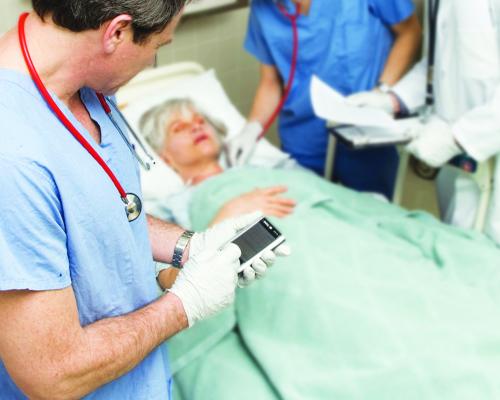 October 28, 2016 — A smartphone application developed by researchers at the University of Turku, Finland, can detect myocardial infarction, commonly known as a heart attack. No extra equipment is required for the app as it utilizes the phone's built-in motion sensors, especially the gyroscope. Therefore, the used technology is largely similar to the app for detecting atrial fibrillation that the research group announced in August. The myocardial infarction detection app should be available for test use in 2017.

Cardiovascular diseases are the most common cause of death killing over 17.5 million people worldwide in 2012. One of the most well-known diseases belonging to this category is an acute myocardial infarction, i.e. a heart attack.

It is important to detect the heart attack when the first symptoms appear, so that the patient can receive medical care as quickly as possible. However, sometimes people mistakenly assume that the chest pain is transient or caused by a heart burn, which can be fatal.

Myocardial infarction is caused by a blockage in the coronary artery that supplies oxygen-rich blood to the heart. The part of the heart muscle suffering from the lack of oxygen can be permanently damaged and therefore urgent clinical intervention is very important. The best treatment is a quick coronary angioplasty, said Professor of Cardiology Juhani Airaksinen from the Heart Centre of Turku University Hospital.

The study tested how well a heart attack can be detected using only the data collected with the built-in motion sensors of a smartphone. The study group consisted of 17 infarction patients, who were treated at the Heart Centre of Turku University Hospital. Measurements were taken by placing the smartphone on a patient’s chest for a few minutes while they were laying down and it measured the rotational micromovements of the chest. One recording was taken from each patient during the heart attack and the other after the coronary angioplasty surgery. Next, the researchers compared the two datasets.

The sensors of the smartphone, such as the gyroscope, are so sensitive that they are able to measure the rotational micromovements of the chest caused by the movement of the heart when the phone is placed on the patient’s chest. When the blood flow to the heart muscle is disturbed, these micromovements in the chest are affected and the phone can sense it, said Project Manager Tero Koivisto from the Technology Research Center (TRC) at the University of Turku.

All iPhones and many Android phones feature a gyroscope. Data processing is carried out automatically and does not need to be interpreted by a person with medical training.

“Before the actual analysis that is based on machine learning, the data is preprocessed and, for example, the data corrupted by excessive movements is removed. After that, the machine learning algorithm we have developed can immediately tell if the patient is having a heart attack,” Koivisto said.

In the study, the algorithm detected myocardial infarction with the minimum accuracy of over 70 percent. The researchers believe that if the app has recorded the patient’s baseline before the heart attack, it should be possible to achieve an accuracy of over 90 percent.

When someone feels acute chest pain, the phone should be placed on their chest in order to start the recording. The data collection phase takes about two minutes. The app analyzes the data immediately and gives the result.

“The app is intended to encourage patients to seek medical care faster. Our goal is not to rule out heart attacks, but to give a signal to the patient when a real emergency is at hand,” Koivisto said of the intended use of the app.

“In my opinion, this is worth trying, because this kind of a solution could lower the threshold for seeking medical care in a case of acute myocardial infarction. Assessing the symptoms of a heart attack can be sometimes very difficult and the possible additional confirmation given by the app could be extremely necessary,” summarized Airaksinen.

The research results were achieved in a New Knowledge and Business from Research Ideas project funded by the Finnish Funding Agency for Innovation, Tekes.