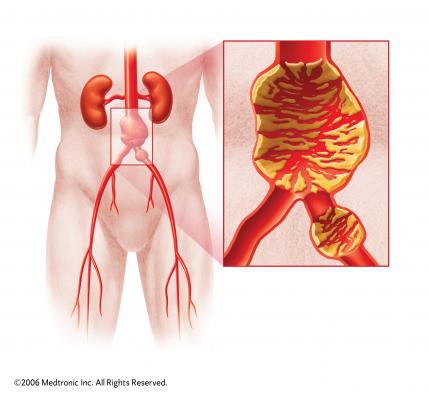 April 5, 2017 — Following repair of abdominal aortic aneurysms (AAA), women appear to have more unfavorable outcomes than men in terms of mortality and morbidity.

Aortic aneurysm rupture remains a significant cause for morbidity and mortality. With increasing awareness, as well as continued screening programs, the medical community can limit the impact of this vascular disease.

Current indications for surgical repair include aneurysm diameter greater than 5.5cm (in men), rapid growth, symptoms and rupture. Because women tend to be smaller in stature, repair at smaller diameters are often recommended. Women are less likely to develop AAA, but when they do, the aneurysm tends to grow faster and ruptures sooner than in men. Once treated, evidence suggests women have worse outcomes than men following procedures to repair AAA.

As reported in an article in the April edition of the Journal of Vascular Surgery, researchers from Harvard’s Beth Israel Deaconess Medical Center and Massachusetts General Hospital, led by vascular surgeon Marc Schermerhorn, M.D., performed a study examining gender differences in AAA repair.

A possible explanation for this difference proposed by the authors is that women have smaller baseline aortic diameters given their overall smaller body size. The researchers re-analyzed the data using Aortic Size Index (ASI) instead of aortic diameter. This index divides aortic diameter by body surface area.

In doing so, Schermerhorn noted that “Adjusting for ASI reduces these (gender) differences, suggesting that ASI may be a better indicator threshold for AAA repair for female patients.”

Using ASI as a key component of indicator threshold may prevent unnecessary procedures, significantly reduce risk and increase the chances of a more favorable outcome.