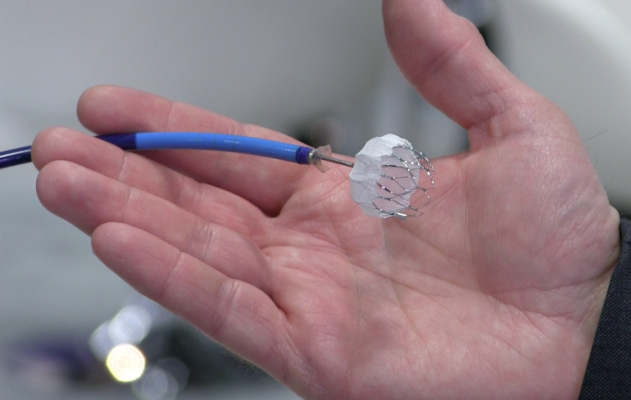 January 6, 2016 — A new study determined that the Watchman left atrial appendage closure device is more cost-effective than warfarin and non-warfarin oral anticoagulants (NOACs) for stroke reductions in non-valvular atrial fibrillation patients. The study — led by Vivek Reddy, M.D., director of cardiac arrhythmia services for The Mount Sinai Hospital and Mount Sinai Health System — was published online and in the December 22 issue of the Journal of American College of Cardiology (JACC).

Atrial fibrillation, a heart rhythm malfunction that affects nearly 6 million Americans, puts patients at a significantly greater risk of stroke, which can be both debilitating and costly. With nearly $8 billion spent annually on atrial fibrillation-associated strokes, researchers aimed to determine the cost effectiveness of three atrial fibrillation treatments: warfarin, NOACs and the Watchman device.

“By its very nature, the Watchman device is not subject to patient adherence issues, since once implanted, the device provides lifelong stroke prophylaxis without the risk of complications associated with blood thinners,” said Reddy. “This is crucial both in improving patient outcomes by reducing disabling strokes, as well as reducing healthcare costs.”

Blood-thinning medications like warfarin and NOACs have long been the standard of care for reducing the risk for stroke in patients with atrial fibrillation; however, many patients cannot tolerate these medications because of the incidence of bleeding and need for bi-weekly blood tests. While these therapies have been demonstrated to be efficacious, their effectiveness is contingent upon patient adherence, as gaps in treatment can lead to stroke.

The Watchman device, made by Boston Scientific and approved by the U.S. Food and Drug Administration (FDA) in March 2015, is implanted into the heart to close off the left atrial appendage, a blind pouch of heart tissue where blood clots form; clots can then break off and travel in the bloodstream to the brain and cause strokes. It is inserted through a vein in the leg during a one-time, minimally invasive, catheter-based procedure in the electrophysiology laboratory.

Researchers used a Markov model constructed from the perspective of the Centers for Medicare & Medicaid Services (CMS) with a lifetime horizon defined as 20 years and three-month cycle length to evaluate the cost effectiveness of the three treatment strategies. Cost effectiveness was assessed annually to determine if there was an observable time horizon over which treatment options reached accepted levels of cost effectiveness.

Reddy served as co-principal investigator for national clinical trials testing the Watchman device, and has served as a consultant to Boston Scientific.