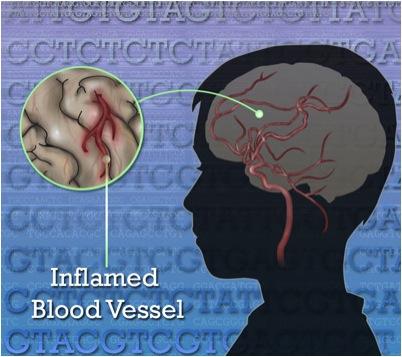 April 30, 2014 — National Institutes of Health (NIH) researchers have identified gene variants that cause a rare syndrome of sporadic fevers, skin rashes and recurring strokes, beginning early in childhood. The team’s discovery coincides with findings by an Israeli research group that identified an overlapping set of variants of the same gene in patients with a similar type of blood vessel inflammation.

A variation in the gene that makes a key blood vessel enzyme makes children prone to fevers, rash and strokes.

The NIH group first encountered a patient with the syndrome approximately 10 years ago. The patient, then 3 years old, experienced fevers, skin rash and strokes that left her severely disabled. Because there was no history of a similar illness in the family, the NIH group did not at first suspect a genetic cause, and treated the patient with immunosuppressive medication. However, when the NIH team evaluated a second patient with similar symptoms two years ago — a child who had experienced recurrent fevers and six strokes by her sixth birthday — they began to suspect a common genetic cause and embarked on a medical odyssey that has led not only to a diagnosis, but to fundamental new insights into blood vessel disease.

In their study, which appears in the Feb. 19, 2014, advance online edition of the New England Journal of Medicine, the researchers describe how next-generation genome sequencing, only recently available, facilitated a molecular diagnosis for patients in their study. The researchers found that harmful variants in the CECR1 gene impede production of a protein vital to the integrity of healthy blood vessel walls.

“This discovery is another example of genome sequencing playing a central role in revealing the genomic basis for an important rare disease,” said Eric D. Green, M.D., Ph.D., director of the National Human Genome Research Institute (NHGRI), where the lead members of the research team are based. “Such studies illustrate how genomics is paving the way to improved human health.”

The researchers showed that faulty variants in their patients’ DNA that encode the CECR1 gene cause a loss of function of the gene’s ability to produce of an enzyme called adenosine deaminase 2 (ADA2). Without it, abnormalities and inflammation in blood vessel walls result. The researchers call the new syndrome, deficiency of ADA2, or DADA2. The enzyme ADA2 is chemically similar to the enzyme ADA1, whose deficiency results in severe combined immunodeficiency disease.

NHGRI Scientific Director Daniel Kastner, M.D., Ph.D., led the team of collaborators from NIH and beyond in mounting the study of nine patients. “It has been incredibly fantastic to see this kind of progress being made within the last decade,” he said. “Our study raises the possibility that the ADA2 pathway may contribute to susceptibility to stroke in the more general population.”

For children, as with adults, stroke can affect physical, cognitive and emotional functioning. Some outcomes, such as blindness and deafness, can be lasting; others, such as the ability to walk, can be relearned.

“While no other incidence of this condition occurred in the families who came to our clinic, the early age of onset suggested to us that the patients were born with a genetic condition,” Kastner said. “We used a whole-exome screen to locate genetic variants in each of the patients.”

Whole-exome sequencing determines the order of DNA bases for the 1 percent of the human genome that codes for proteins. Qing Zhou, Ph,D., a post-doctoral fellow in Kastner’s lab, methodically analyzed two of the patients’ exomes as well as exomes of their parents. Among hundreds of variants that distinguished each patient from their parents, they located two variants that are novel or rare in the CECR1 gene, which encodes ADA2. These variants were passed from both parents to the affected child. The whole-exome sequence of a third patient identified another harmful variant of CECR1 in addition to a small genomic deletion that shuts down the second copy of the gene. They needed only a sequence reading of that single gene to confirm that three other patients were affected by harmful variants in this gene. Three of the eight detrimental variants that eliminate the protein ADA2 were shared among the first six patients.

The team subsequently sequenced the CECR1 gene in three additional patients from Turkey who had some of the symptoms of the new syndrome. They found that a homozygous pair — a double dose of a different variant — from the one detected in the first six patients causes a disease called polyarteritis nodosa (PAN). PAN is a form of vasculitis, an inflammation of medium and small arteries that leads to pain, rashes, numbness, weakness and vital organ damage. PAN can cause kidney failure, heart attack and stroke.

“We now know that this mutation exists in the Middle East and in Pakistani populations and that it is not that uncommon,” said Ivona Aksentijevich, M.D., senior author and staff scientist in NHGRI's inflammatory diseases section. The Israeli researchers, whose study is published concurrently in the journal, found the same mutation in CECR1 as those NIH patients with PAN. The patients in the Israeli study are from families that emigrated to Israel from the country of Georgia. “This is the first time a single gene has been discovered that is involved in causing a system-wide form of vasculitis,” Aksentijevich said.

The researchers found data from a study of adult patients showing that those who carry only one mutation in this gene may have a predisposition to develop adult onset stroke. They also induced ADA2 deficiency in a zebrafish animal model. They found that zebra fish embryos that produce less ADA2 than normal embryos have cerebral bleeds, similar to those seen in some of the children with ADA2 deficiency. The primary role for ADA2 protein is as a growth factor. Data from the zebrafish model suggest that this growth factor plays a role in blood vessel development.

Members of the research team led by Manfred Boehm, M.D., senior investigator at the National Heart, Lung, and Blood Institute, established the link between ADA2 deficiency and inflammatory blood vessel disease in the patients. Dan Yang, M.D., Ph.D., a staff scientist in Boehm’s lab, discovered that ADA2 deficiency causes a faulty function in a subset of white blood cells called monocytes/macrophages. The faulty monocyte/macrophages attack the patients’ own blood vessels, resulting in a vicious circle of vessel damage and inflammation that leads to stroke and other blood vessel-related problems.

The discovery of the molecular basis of DADA2 has treatment implications. As an alternative to high doses of steroids, which produce profound side effects, the study suggests that treatment may include specialized drugs that inhibit inflammatory proteins produced during the syndrome. Also, since ADA2 is made in the bone marrow and circulates in the blood stream, the team is evaluating a way to replace ADA2 that is missing in the bloodstreams of those affected by DADA2. The researchers obtained approval from the U.S. Food and Drug Administration (FDA) to test the safety and efficacy of using freshly frozen plasma to restore ADA2 functionality for treated patients. Alternatively, an artificial form of the protein would help, but is not currently in development. Bone marrow transplantation or genetic manipulation of bone marrow could also have a role in the treatment of these patients.

“This genome sequencing study expands what has previously been known about vascular biology, and it is truly gratifying to be among two labs using next-generation genome sequencing technology to arrive at complementary conclusions about the functionality of the same gene,” said Kastner. “The role of ADA2 in such serious human disease is important and suggests that ADA2 variants may contribute to other more common illnesses.”