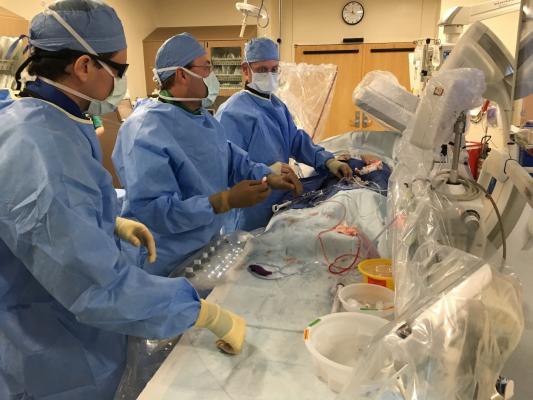 September 1, 2021 — The STOPDAPT-2 ACS trial does not support the use of one month of dual antiplatelet therapy (DAPT) in acute coronary syndrome (ACS) patients undergoing stent implantation. That was the finding of late-breaking research presented in a Hot Line session at European Society of Cardiology (ESC) Congress 2021.[1]

“One-month DAPT and subsequent clopidogrel monotherapy failed to achieve noninferiority for net clinical benefit compared with standard 12-month DAPT after ACS. There was a trend toward an increase in cardiovascular events despite a reduction in major bleeding events," explained study author Dr. Hirotoshi Watanabe of Kyoto University, Japan.

The STOPDAPT-2 trial previously demonstrated that among patients undergoing percutaneous coronary intervention (PCI), one month of DAPT followed by clopidogrel monotherapy resulted in a significantly lower rate of a composite of cardiovascular and bleeding events, compared with 12 months of DAPT with aspirin and clopidogrel.[2] In that trial, 62% of patients had stable coronary artery disease and 38% had ACS.

To generate sufficient statistical power to compare the effect of the two treatments in ACS patients alone, the STOPDAPT-2 ACS trial enrolled 2,988 ACS patients and pooled the results with the 1,148 ACS patients in STOPDAPT-2 – for a total of 4,136 patients. Both trials used the same protocol. Participants were randomly assigned in a 1:1 ratio to one-month DAPT followed by clopidogrel monotherapy or 12-month DAPT after PCI with cobalt-chromium everolimus-eluting stents.

The primary outcome was a composite of cardiovascular and bleeding outcomes at one year: death from cardiovascular causes, myocardial infarction, definite stent thrombosis, ischemic or hemorrhagic stroke, and Thrombolysis in Myocardial Infarction (TIMI) major or minor bleeding.